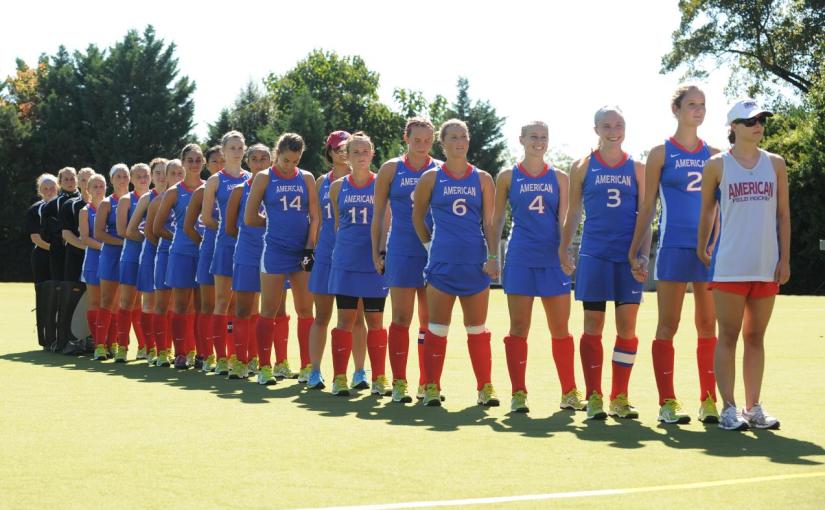 Last year’s conference statistics are imposing. The eagles got off an impressive 127 shots in Patriot League contests ( 21 shots per game) and earned 50 penalty corners. Looking more closely 33 of those shots came against Colgate, while Boston was able to hold them to only 9 shots during their regular season meeting. The four graduating seniors accounted for 34 of those shots and 5 returning underclassmen DiGiandomenico, Rachel Stefano, Haley Bowcutt, Kathryn Roncorni,and Rafaela Rubas accounted for 61 shots in conference regular season games. Goaltending seems to be in solid hands with starter  Mara Jacobs between the pipes returning.

It’s hard to imagine any of the four Eagle freshman having an impact or getting significant minutes with this returning lineup. Last year the Leopards took the Eagles to two overtimes losing 2-1 at Rappolt Field. This year’s game will be in Washington Saturday on  October 21st at noon.

Steve Jennings, is in his 19th season at American and the Eagles look very tough this year. Their out of conference schedule looks a little light compared to previous years. Maryland is missing and by my count they will be playing only 4 NCAA tournament teams this year. The Patriot League will be a little tougher with plenty of competition for the four coveted tournament berths at stake during the regular season.  American is playing only 6 home games this year, one of them of course is Lafayette, along with other league rivals Bucknell and Holy Cross.

Next up in coming days, in alphabetical order, Boston University.