One could say that today began the 2017 season for Lafayette Field Hockey. Every year Coach Stone and her staff along with a faculty of top notch players from the US and Overseas  arrive in Easton to begin a two week series of camps. The first of the these camps under the banner of the Total Hockey Field Hockey Camp began today at 12 noon. This camp is run from July 6-8 totally devoted to sharpening individual skills. The current Lafayette Field Hockey team is also in attendance as camp teachers and counselors. The benefit for these young players is to get a taste of division one coaching and the experience of living on campus and playing with other players from across the region and country. They will even get a shot at playing against the current Lafayette squad and instructors in challenge matches in the evening. For rabid fans like me it was my first chance to see many of our first year players on their new home turf.

Sprinting is fun for campers 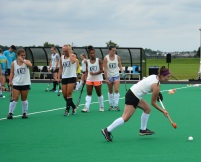 I could already see some team bonding as the recruits ( both arriving this fall and some who have already shown a keen interest in Lafayette in the future)  drilled together, displaying their talents for their new teammates and coaches alike. ( And I suppose for rabid fans like me.) My conclusions……this is a talented group set to arrive on  August 8. I saw speed, stick skills, and “coachability,” as they went through their drills. As an associated person in NCAA parlance, I was unable to interview or welcome any of the five first year players in attendance, but I was able to observe their obvious talent from a distance.

The three Lafayette staff coaches, Jennifer Stone, Sarah Dalrymple, and Emily Janis seemed pleased with what they  saw in the first three hour session. So did I.

After registration between 10:30 and 12, and after a group meeting the approximately 50 athletes boarded a bus to be transported to Rappolt Field which was being sprayed using its automated water system in preparation for the afternoon. The cloudy skies were a blessing as the recent hot spell on the east coast had abated and the athletes could really perform without the disadvantage of excessive heat. They broke into groups with the field players breaking off from the goalkeepers as each unit began practicing  basic skills under the watchful eye of the camp instructors.

At the end of the first session they boarded a bus to be chauffeured to campus where they will be able to sample the meals at the Farinon Meal Court at 4;30 and  prepare for team 11 v 11 games scheduled for 6;15-9:15. At 9:15 the lights are turned on for the first challenge games, Staff vs Campers. They will board a bus back to campus at 9:45 and will have chance to visit the campus store before a room check at 10:30.

Our intrepid campers will rise at 7 am tomorrow and after a hearty breakfast transportation is ready to take everyone to the field in time for speed and agility training at 9 am. At 9;30 it’s skill development again before departing for lunch. At 1:15 a one hour group session is scheduled with the sports psychologist before training session again at 2:45. A video session is schedule for 4:30 before the evening games begin at 6;15.

Saturday ends the session with final games scheduled for 9-11 in a 7 v7 format . It is a full plate but only a warm up for the season for these high school stars and for five of our seven recruits, Eva Kaplan, Grace Angelella, Greta Kullby, Sophie Carr and Lola Dada. Anna Steps from Germany and Audrey Sawers from British Columbia  will be there on Aug 8.

For me, this was the beginning of the season as some of the Lafayette class of 2021 has had their first taste of Leopard Field Hockey.

Next up, the continuation of the Patriot League with review of  Boston University.