Lafayette finished their last competition of the spring defending a series of shots on goal as Penn desperately tried to find the back of the net. Becca Harbert turned away three in a row putting an exclamation point on a spring where Stone’s warriors challenged some of the best in Division one. They improved their tempo and pace as the spring marched on while dealing with adversity and very little bench to give them a break on the field.

There were some teams in the league that were content to play some divsion 2 and 3 teams, but our Leopards steeled themselves for a challenging season this fall.

Lafayette started out with Delaware and gave up 2 goals on corners, but in the second quarter they answered with a goal from Lineke Spanns who was busy all afternoon. Felicitas Hannes found her range later on against Penn and was threat to be reckoned with as she wound up towards the goal.

Fans got a glimpse of the future as Spanns and McAndrew teamed up moving the ball up the field. We also saw progress from Alex Conway and Shea Balderson and they were able to turn the direction of their opponents consistently.

Simone Hefting and Sydney Woolston were a wall in the back line often time starting the offensive attack. Despite shortages of personnel, this team shows promise for the fall. There will be 6 or 7 new recruits to bolster the lineup, and springtime injuries will have healed in the coming 100 days.

In any case, our Leopards showed their toughness and skill and will be a considerable threat. Goals missed during the spring will be made this fall, as this could be a fun season for all!!!

Every year the powers that be, review the rules for field hockey to look for improvements for the game. Coaches look to new ways to arrange their team to take advantage of opponents. Likewise, technology marches on, providing coaches, players and officials with tools to make the game fairer and accurate.

Several years ago there was the advent of cardiac monitors to give coaches on the sideline a view of the effort and stress on the field. For most Division one teams this has become a standard addition for practices and even for monitoring during games. Officials now communicate with each other via headphones on the field.

The next generation of technological innovation is being worked on at Lafayette. My wife and I were on campus yesterday and took a short drive to Metzgar athletic campus and observed there was installed in the south side of the field hockey field, three cameras. Lafayette is now testing a system that will eventually include as many as six cameras for video referral.

Video referral is now standard at many schools including those in the Big Ten, ACC, and many Big East schools. It is required to be provided by host schools in the NCAA tournament. Lafayette will be the first school in the Patriot League to have video referral at home games. Which means potentially, Lafayette might only play 3 games without referral. If Lafayette were to host the Patriot League tournament that tournament like the NCAA tournament, would be played under referral rules.

Aside from games, the software could be used at practice to focus on individual players to assist coaches in improving skills and tactics. Yes, Lafayette initially will be the leader in the Patriot League in providing this technology. I believe it won’t be long before the rest of league will be catching up. Those who stand still, risk being run over!! Go Pards.

No doubt other improvements are being considered as Lafayette builds a winning culture…stay tuned!!! 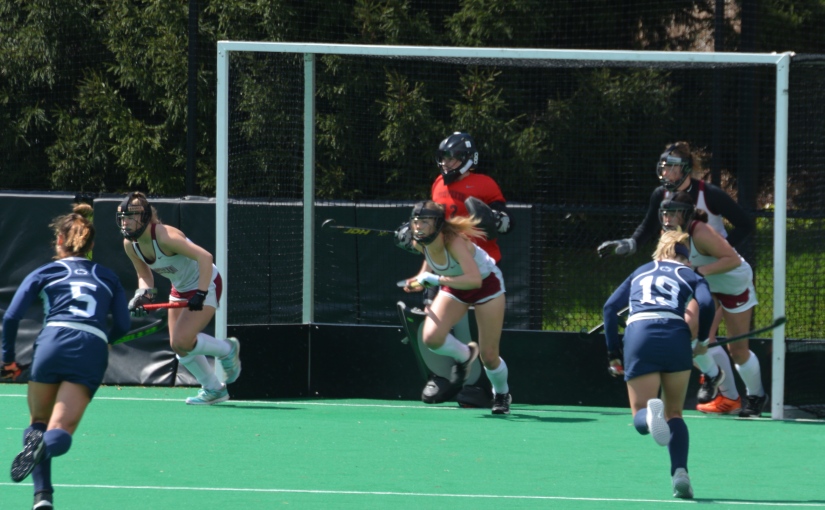 It was a tale of two teams as Lafayette started out as cold as the north wind that was blowing across the field at St. Joseph’s. It was a three way series of contests between Lafayette, St. Joseph and Penn State. By the the end of the day the light went on for Lafayette and they demonstrated why their Patriot League opponents will have a lot to think about this fall.

The first two contests between Lafayette and Penn State and later St. Joe’s had the Hawks and Nittany Lions setting the speed and pace of the game. However, by the end of the day the Leopards went into high gear scoring and winning one game with Penn State and getting numerous shots against the Hawks of St. Joes.

Lafayette was finally getting fast breaks and beating the high press their opponents continued to throw at them. It gave this fan a peek of the Leopard team potential.

Everyone was to contribute and our forwards took their legs into high gear until mid afternoon. The Leopards sprint on the field seemed to coincide with the sun which finally came out, as the Leopards were to show their ability.

The day ended with a sudden death overtime 7×7 followed by a shootout with St Joes which the Leopards took.

The next game is with Big Ten opponent Rutgers at 7 pm on Friday.

As our young players move from high school to college, the level of hockey continues to improve as many high schools and now universally, clubs, play on turf. At the club level in particular, skills are acquired that can be used in college, as the short water based turf at clubs is more akin to the turf that is used at all division one schools.

Like most sports at the Division one level and beyond, the defining skill for success on the field is speed and the acquisition of receiving skills. The players are faster, the ball is faster, reaction time is faster and increasingly, awareness on the field includes anticipation of not only where your teammate or opponent are on the field, but most importantly where they will be.

Passes are made to give your teammate a lead in full stride much like a football quarterback will lead his wide receiver. On defense the anticipation of movement will lead to opportunities for fast breaks and turning a defensive effort into an offensive scoring threat. It’s a beautiful thing to see when executed in any sport, and often time defines success at each level. Stand still and get beaten at any level. Coach Stone’s emphasis on fitness is the foundation for being able to play the game at a high level. Without fitness, movement will not be possible. She is trying to give all her players experience with top teams who play at a championship level. Spring gives everyone a chance to reach the “next” level and test themselves.

This spring Lafayette will meet St Josephs, Penn State, Rutgers, Penn and, Delaware. All will play at an increasing pace and Lafayette will be learning to play at the pace that defines the “next level.”

This Saturday the Leopards will traveling to St. Josephs and will also play Penn State. Both teams were NCAA tournament participants. Each “game” will be 2 full quarters with 2 minutes between quarters. So 30 minutes of playing. It will be a total of 42 minutes between game start times. The day starts at 11 with St Joes and Penn State. Lafayette plays Penn State at 11:42 and St. Joes at 12:24. Lafayette will next play at 1:48 against Penn State and follow with St. Joes at 2:30.

There is a final game with St Joe’s starting at 3:12. It’s an interesting day for Lafayette and an opportunity for Lafayette to improve their pace and speed. 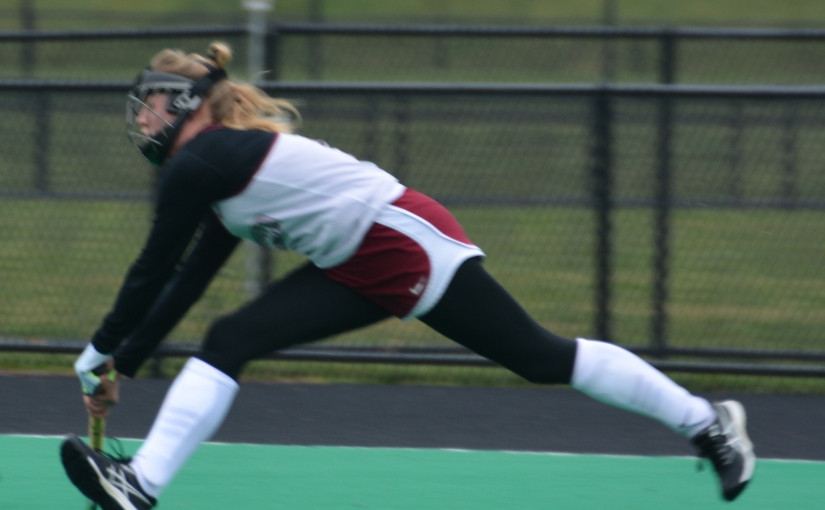 The Leopards are still in the construction phase of organizing their team for the fall. Coach Stone has presented the team with strong challenging opponents, which should in the end expose weaknesses as well as, strength while providing learning opportunities. This afternoon, the Leopards faced two good teams. The Hawks of Monmouth, newly a member of the CAA, and the ACC’s Syracuse Orange who showed why they are highly regarded.

The afternoon started out with great promise as Lafayette scored the first goal of the afternoon in an intense scrum in front of the cage. Molly McAndrew found the handle finally to score with only 1 minute having run off the clock.

For the next two periods Monmouth displayed their fast breaking slashing style. The Lafayette’s defense held up well, but the Hawks managed two more goals ( one on a corner). During the three quarters, Monmouth managed as many corners as goals.

Syracuse, who was an NCAA tournament team, also scored 3 goals against another goal by McAndrew. Syracuse also had four penalty corners and five shots on the afternoon.

The weather was threatening all afternoon, and I have to say the Leopards played their best quarter against Syracuse on their third try. The Lafayette offense has yet to get in mid season form, managing few shots and circle penetrations. Most concerning was the lack of any penalty corners all afternoon after six quarters of hockey.

But this is why we have spring “games.” It is not only an opportunity for young players to find their place, but for coaches to evaluate and groom their current talent before the new recruits arrive. The fall will have fewer opportunities before the beginning of the championship season.

For many of the players this is their first spring training where they are having the opportunity to improve their skills and for their teammates to know where they are on the field. Meeting teams like Syracuse, Penn State, Temple and Monmouth is an opportunity, as they may see them again this fall!!

Next week gets no easier, with games at St. Joseph’s with Penn State joining in the fun. I expect our passes to be crisper and energy to be more obvious.