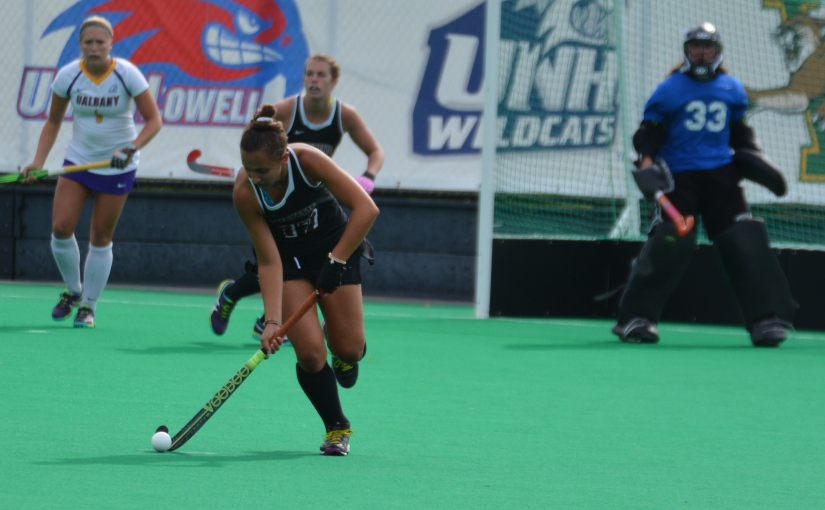 Theresa Delahanty has been notified by Field Hockey USA that she has been selected to play in the Young Women’s National Championships on June12-16. The championships are played to aid in the selection for the developmental squads and the eventual junior national squads. Players are selected from a variety of training sites around the United States and the best of the best are asked to participate.

Delahanty has seen a lot of minutes as a Leopard midfielder and defender, and is known for her intense and aggressive play. She begins her junior season this summer on August 8th with the rest of her teammates.

Recent Lafayette graduate, Amanda Magadan, wasted little time getting into the swing of elite field hockey as she earned her first international “cap,” in a game playing for the US national team at Spooky Nook, Pennsylvania, the national training center for the US Team. Wearing number 12 in the Red, White, and Blue Magadan saw action on the international turf for the first time as the US beat Ireland 3-1 last night. The new players were introduced to an admiring home crowd before the game, while veterans were also noted for the many caps they have earned.

Coach Stone and asst Coach Sarah Dalrymple were attendance for the event and to greet Amanda in her new uniform. Magadan has been practicing with the team, even while a student this past semester. She attended classes during the week and drove to Spooky Nook every week-end for practice. Her hard work was rewarded with last night’s appearance.

Amanda is the first Lafayette field hockey player to be selected  from all over the country to receive a chance to be on this elite squad. Amanda is one of six selected from the entire nation.  The US team continues it’s series with Ireland on Friday night at 6:30. The game is streamed live for all you fans starved for top notch international field hockey. 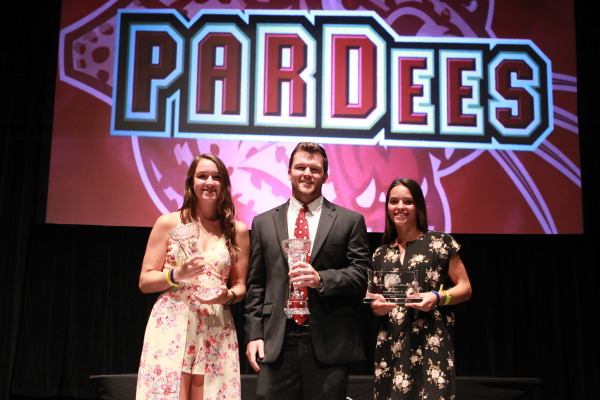 Amanda Magadan and Katelyn Arnold walked off with the major awards for female athletes at “Pardees.”  Pardees is the final event honoring this year’s athletes and traditionally occurs right before graduation . Magadan received the coveted Charles A. Albert award for outstanding female athlete and Arnold received the class 1913 award recognizing the outstanding student athlete. Both teammates were all patriot league selectees and on the Patriot League honor roll. Both had already received honors from the Lehigh Valley Alumni Association as outstanding female athlete and student athlete. Both had been key performers all four years of their career.

Magadan was an all-american selection and was recently selected to be a member of the US Women’s field hockey team. She has already been training on weekends with the team in Spooky Nook, Pa. while finishing her requirements for graduation occurring tomorrow. Arnold will graduate with a 3.95 GPA and Magadan with a 3.31 GPA .

Both are carrying home a ton of hardware collected over their four years. Highlights for these seniors include signature wins over top 20 and top 10 teams, appearances in the Patriot League playoffs, and competitive games with eventual National and past national champions.

Academically the Field Hockey squad is finishing their year and many are preparing to make the trip back to New Jersey, Pennsylvania, Maryland, Massachusetts, Canada, Scotland, and the Netherlands. It’s been an eventful year with its obvious ups and downs, but certainly with lessons learned. From what I saw this spring there is a determination to come back on August 8th, a better, stronger, more skillful, team. As I said in my last article, the last two spring contests saw a true division one team emerge. If it’s true that the whole will be even stronger than its parts, it could be an exciting fall.

August 8th will also see the addition of a new class who will have two weeks to adjust to the faster play, longer periods and skillful competition they will face. The league will be stronger with every team making an effort to up their game. Bucknell is traveling to the Netherlands this summer, American will have added an additional year to train a very strong squad from last year, Boston will reload, Lehigh has a second year with their new coach and an improving squad, Colgate is adding a new Coach, and Holy Cross has gone to Europe to strengthen their already improving squad. It will be a scramble no doubt for that championship trophy.

Several Leopards will be staying on campus and will undoubtably will be spending many evenings with veterans sharpening their skills on Rappolt Field. In addition, the Leopards will have four players who have made the USA field hockey high performance practice squads. Sophomore goalie Sarah Park, senior defender Cody Hunsicker, sophomore attacker Sam DiMaio and Junior midfielder Theresa Delahanty are all ready to compete this summer. This is the highest number to my recollection of Leopards doing High Performance. No doubt our foreign players will be returning to their club teams as well.

August 8th is already circled on my calendar. In the meantime I will try to keep you abreast of everything until then. Amanda Magadan continues on the US squad and could see action this summer at an international tournament at Spooky Nook. Katelyn Arnold has been nominated for the class of 1913 Student Athlete award and certainly Amanda Magadan will be a nominee for the female athlete of the year.

Congratulations to all our graduating seniors and best of luck. Remember you are always in our thoughts and we hope to see you at all the alumni events in the future.