Despite a significant snowstorm over the weekend the Leopards returned to their first series of workouts with Coach Stone and the strength and conditioning team yesterday. When asked how everyone looked, predictably Coach Stone said we have work to do to compensate for the wonderful Christmas and New Year’s festivities. They will not return to the turf for several weeks but I get the impression fitness will not be an issue …….by then.

Meanwhile it was announced today that the team as usual put in a maximum effort in the classroom last fall as 12 were placed on the Patriot League Academic Honor Roll. To be eligible for the Fall Honor Roll student athletes must earn at least 3.20 grade point average. Leading the team was junior goalkeeper Katelyn Arnold with a perfect 4.0 average in a double major of Economics and Government and Law. She was one of ten Patriot League Field Hockey players in the conference to accomplish the feat.

Congratulations to all of these scholar athletes.

Time marches on and the weekend of February 6 will see most of the new Leopard recruits on campus as they get together for the first time with their new teammates. Welcome to all!!!

Lafayette field hockey returns to the familiar surroundings of the College next week, along with their classmates, to begin classes for the spring semester. Unlike their friends who are not athletes, the team will begin its preparations for a spring season that will be a period of experimentation for the fall. The coaches will be evaluating their returning talent, and without the graduating seniors and new recruits, this will be a period of competition where many will see far more playing time than they did in the fall.

Many of our Leopards have not been wasting the December-January period but playing and honing their skill as well keeping fit. Spring is always a challenge that many of the youngest players have not seen before. However, upperclassmen as well have been hitting the turf to be the best they can be. Amanda Magadan is playing with the US under 21 team, getting ready for the Junior Pan Am games by playing against tough international competition. Freshmen Rachel Bird and Kristen Taylor spent early January in Barcelona playing with their Vancouver Team in the 68th Torneo de Reyes tournament. Kristen was the captain of her team leading them to a 1-1-1 record against teams from Holland, England,Belgium, and Spain.

This period can be extremely important especially for the younger players. Arriving on campus in shape and ready to play is extremely important. The first order of business will be conditioning, as the coaches plan to have the team ready to hit the turf in a month when the snow and ice leave the field. They will be using the field house in the meantime to play indoors, and Coach Stone has planned to attend an indoor tournament March 5-6 where the Leopards will meet against some of the top teams in the country, including Maryland and Syracuse. The indoor game, played on a hard floor with a different stick is faster than the outdoor version, but is a welcome break to the monotony of early training.

The spring schedule, time wise, is less demanding than the fall schedule, but in many ways doesn’t lack for intensity as everyone is trying to impress the coaches with improvement. In the meantime, classes remain a primary focus and there are less travel issues, as all the games are weekends and at local venues.

The NCAA is weighing ideas to limit the hours athletes devote to their sport.  Many of the ideas, are already current practice for Ivy and Patriot League schools. One idea calls for a ban on practices and other mandatory athletic activities  from 9pm to 6am. I can’t remember a time where that was that issue at Lafayette. Another proposal is to create a three week break at the end of the traditional season. Again that is a practice for Patriot and Ivy schools. Some colleges at the “elite” level spend 40 or more hours a week on sports. I have heard of cases where coaches have discouraged players from majoring in the STEM area, because of time limits at some schools.

The above proposals are a starting point, as described by the NCAA, but to my mind do not touch on the most important consumer of time, and that is travel time. As many large university athletic conferences have merged and enlarged, the regional nature of athletic conferences has disappeared. Unlike the Patriot League and Ivy League, it would not be unusual for a soccer team, field hockey team or worse a baseball team to travel thousands of miles during the week to meet their conference foes, missing valuable classroom hours in the process. This is especially acute for the “non-revenue” sports. The Patriot and Ivy conferences remain regional conferences with no foe more than a bus ride away.

This does not make either of the conferences less competitive, but certainly more in the line of supporting the term “student athlete.” I have written about this before and more that ever I believe young recruits should take that into consideration in their school choice. Even the big power conferences are beginning to realize there is a limit. One conference is considering including travel days as part of a 20 hour restriction on athletic time. Jack Swarbrick, the athletic director at the University of Notre Dame agrees, and was quoted in the Chronicle of Higher Education, ” If you’re really concerned that student athletes have enough time, you ought to focus on scheduling and traveling. Nothing is  more important than that,” he opines

Time will tell how this eventually gets sorted out, but the Patriot League model continues to be a pretty good template to follow in my opinion. Perhaps in the future, conferences may be more sport specific and regional, to rationalize the travel time issue. That’s my suggestion but, highly unlikely to be adopted anytime soon. 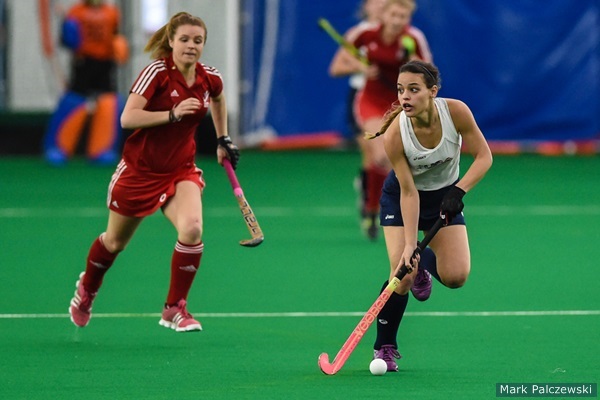 It has been nearly two months since the end of the season for the Leopards but preparations for the 2016 season have already been put in motion as the team and its Coaches look to improve and challenge for the 2016 Patriot League crown. Lafayette returned to the playoffs last year, but fell in a hard fought contest in the semi-final round. Although they will lose six seniors the Leopards will return a strong group of experienced players to build from. Team captain and all league and all region player Amanda Magadan will return for her senior season with a full year of experience under her belt with the under 21 US team. Amanda is the “Vice Captain” of that squad demonstrating the respect she has earned nationally and internationally. Rising sophomores Kristen Taylor and Rachel Bird have been playing in Spain with their home Canadian team honing their skills as well.

Coach Stone has been busy combing the US and abroad for new talent to fill in the gaps lost to graduation. She has signed six during the early signing period in November and has an additional commitment from an overseas star which will be revealed on the April signing date. She expects to add to that commitment with one additional to make the total new class eight strong!!!

A spring competition schedule is in the works for the returning veterans which will include an indoor tournament in Spring City, Pa on March 6-7, an April 2 game at Temple, and an April 17 game at Columbia. There is still an open slot on April 9th for a home game and the annual alumni game on April 16 followed by the team banquet.

In addition, the fall schedule has been finalized, which will include two early scrimmages with Rutgers and Columbia before an opening game at home with former Patriot League rival Fairfield University on August 28 at home, at noon. The Leopards will spend September playing out of conference foes Monmouth, Longwood, Yale, Quinnipiac ( now in the Big East), Towson,and Hofstra,before meeting Boston Uninversity at home at 7pm on Sept 23rd followed by Delaware on Sunday the 25th.

October as usual will be filled with Patriot League action with out of conference foes Albany, James Madison, Harvard and Temple mixed in. The Patriot League Tournament will be played at the site of the highest seed on Friday November 4th and Saturday the 5th. Followed by the NCAA tournament the next two weekends.

The team is returning to school at the end of January when preparation will begin to return to the field. My next article will focus on two initiatives at work by the NCAA. The first is to ease demands on athletes time and the increasing tendency for coaches to gather commitments earlier and earlier. In my neck of the woods, I have heard of commitments being given as early as the freshman year in high school to Division one schools.