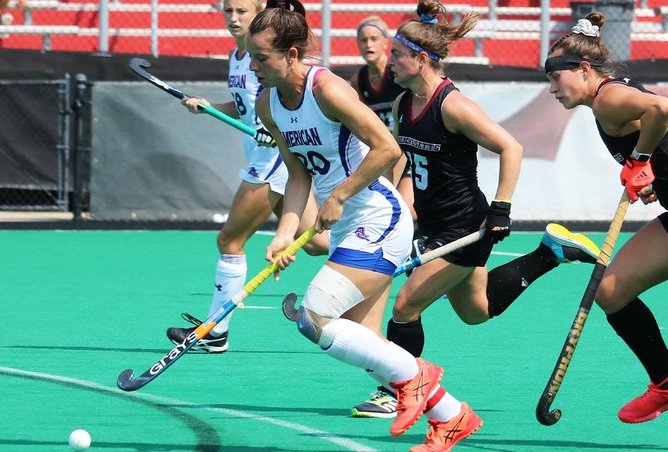 The Leopards will meet the Eagles for the third time this calendar year for the opening game of the 2021 Patriot League season. The previous three meetings have resulted in losses by one goal, the last game being a loss on a controversial penalty stroke in the second overtime period. It will be American’s first home game of the current season and the two teams sport records that promises this will be a very competitive game as usual.

So what can we glean from the data? Clearly the second period is the most crucial for both teams, but Lafayette has a slight edge in first period goals. The Leopards defensive unit will play a key role, while their offense may be a crucial in the first half in forcing the Eagles out of their defensive sets.

Lafayette has thee players who have scored the most goals McAndrews, Sawyers, and Hannes. Noor Coenen has scored three goals on 23 shots and is clearly the go to player for the Eagles. The rest of the goals are spread among six other players with single scores to their credit.

I like our strong midfield in this one, led by Audrey Sawers but I am sure American has already figured that out. American has had no shutouts this season while the Leopards have had 3.

These are two very well coached teams so it should be exciting for fans to watch and is certainly the “game of the week” in the Patriot League. I will be watching closely on American offensive corners, and I see a few surprises by the Leopards!!! So at 11 am Saturday…see you there/ or on ESPN plus!! Post Script: Neither team is ranked in the NFHCA poll while Lafayette is tabbed 20th and American at 25th on the Bolster Field Hockey ELO rankings.

Lafayette has announced for home games that evidence of vaccination is required for admission or a negative Covid test no later than 72 hours before the contest. Masks will also be required.