Lafayette struck for two goals in the first half. The first was beauty by Molly McAndrew at 5:!4 in the first quarter off a rebound. It was the fifth goal of the season for the senior captain who is a threat every time she touches the ball! The goal followed a penalty corner shot by Co-Captain Audrey Sawers.The Bobcat GK stopped the shot as it rebounded back into the circle when McAndrews found the handle and delivered it back to the cage and beyond the goal keepers reach.

The second goal came 10 minutes later in the second quarter as first year player India Ralph took a. pass from Sawers again during a penalty corner to make the score 2-0. The team was playing like a machine, changing offensive sets, confusing the Bobcat defense, all the while getting off 17 shots during the afternoon game, and earning 11 corners. Quinnipiac only managed 3 shots and two corners all day. There were no shots on goal for Quinnipiac while Lafayette managed 7.

In order to play for Jennifer Stone you must play defense regardless of your position, and play they did!!! Quinnipiac only managed to squeeze off their first shots by the 4th quarter and two of them came off their penalty corners which also didn’t happen until the final minutes. The defense is led by Simone Hefting who is normally in position to start play from the backfield. Defender Sydney Woolston seems to be everywhere plugging holes when needed!! Lineke Spanns continues to excite even on the defensive side of the field stopping play and turning it into an attack! Mary Gould is solid and can be seen inserting on offensive corners when needed. Shea Balderson had 23 productive minutes in the game. Alex Darrah was effective in 26 minutes. In all cases, the team did not lose a step no matter who was in the game!!! 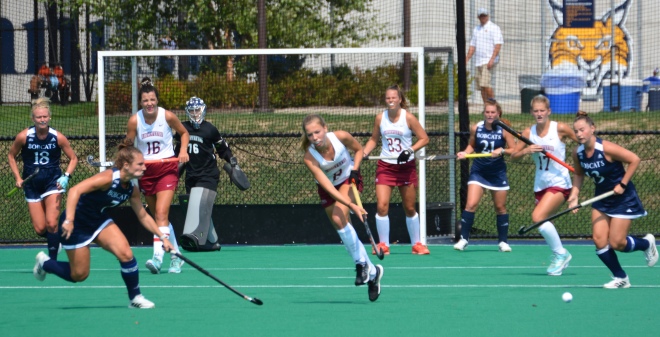 Eighteen players saw action and only the injured and the two reserve goal keepers were on the sideline,

The Leopards must now prepare for their first Patriot League contest in Washington, DC against the Eagles of American University who beat a very good UMass team today 3-2 in overtime. The last meeting with the Leopards was in spring and ended in a controversial penalty stroke goal in overtime. The previous game was at Lafayette which also was won by American by one goal. The year before in the PL playoffs American won 3-2 after Lafayette had the first goal and American responded with three straight goals before Lafayette scored their second goal with 48 seconds to go!!

The game is to start at 11 am and I hope the team is traveling the day before to be ready for this important meeting. This should be game filled with tension and exceptional play. But more about that later this week.