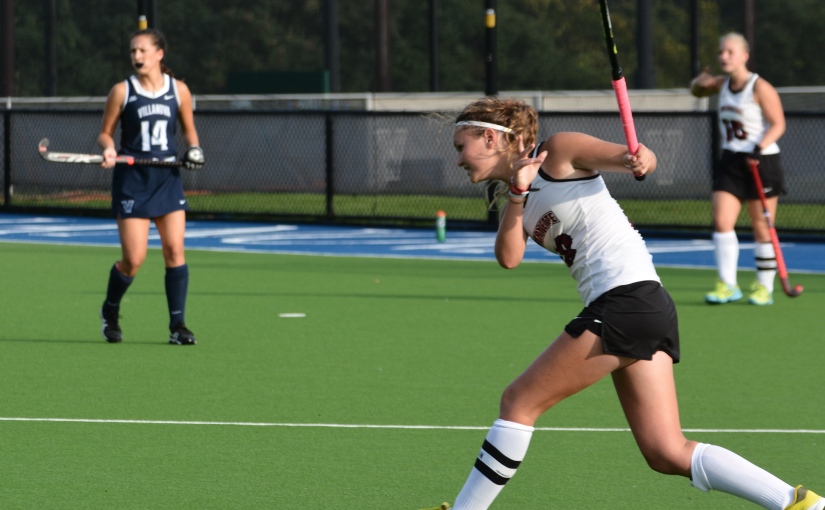 The Eagles of American University and the Leopards of Lafayette will clash in the last game of the regular season for both teams in DC on Saturday at 11 am. It will be senior day for the Eagles but no mind..this is for the regular season championship and the right to host in the Patriot League playoffs. Both teams will either be seeded one or two for the November 8th first round of two. Two days later will be the championship, which will decide who will represent the Patriot League in the NCAA tournament in the following week.

The last time the Leopards made the tournament was in 2012 when they beat the Eagles on a penalty stroke in the cold confines of Rappolt Field. This will be Lafayette’s 18th game of the season ( not counting pre-season) and American’s 16th game. American has arrived here with a 10-5 record and 5-0 in conference play, Lafayette is 11-6 also 5-0 in conference play. The third and fourth team won’t be known until after Saturday’s games.

The Leopards have played 5 ranked teams and won one ( Monmouth). They lost one to Liberty 5-0 and the played the others to overtime.  They also played Fairfield in the preseason. American on the other hand played three ranked teams and lost all of them The largest margin was Delaware in which they lost 0-4. One loss was an overtime game to ODU in a shootout. They lost to Maryland this past tuesday 0-1. So among other factors and those, Lafayette’s SOS is 9 places better.

Penalty corners which could play a role in the outcome is 6 per game for Lafayette against 4 for opponents. American averages 6.5 and opponents 2.6.  American’s freshman GK Fiona Minter has a 63 percent save percentage, while the Lafayette goal keeper Sarah Park has a 75% save percentage.

Both teams are blessed with intense, committed athletes. Noor Coenen is the clear go to person on the Eagle squad. The Dutch junior can be found all over the field and in the Maryland game made her self known on the defensive side of the field. Senior Lisa van der Geest  is the leader and competitive soul of Lafayette. She has a strong stroke and a real danger on both sides of the field. She is the reigning National Defensive Player of the Week, and has scored seven goals for Lafayette.

One interesting stat I discovered while researching this article is that Noor Coenen is the leading accumulator of cards on the team….8 green and two yellow. She is an intense competitor no doubt.

The team will  leave Friday morning to try the new turf at American. Coach Jennings will no doubt try to contain the Lafayette attack hoping to generate offense by interceptions and breakaways. Lafayette will  do much the same hoping to occupy the circle and get corners for opportunities to face the American GK.

It seems like a long time since the beginning of the season. Both teams have their share of bumps and bruises, but you can bet if a player can stand up, they will be giving their all on Saturday.

The Leopards have a strong, deep and tested bench which should give them some advantage and no reason to slow down during the game. It’ll be all out for both teams!! You all know where my heart is in this one. Home field is a BIG DEAL!!! GO PARDS!