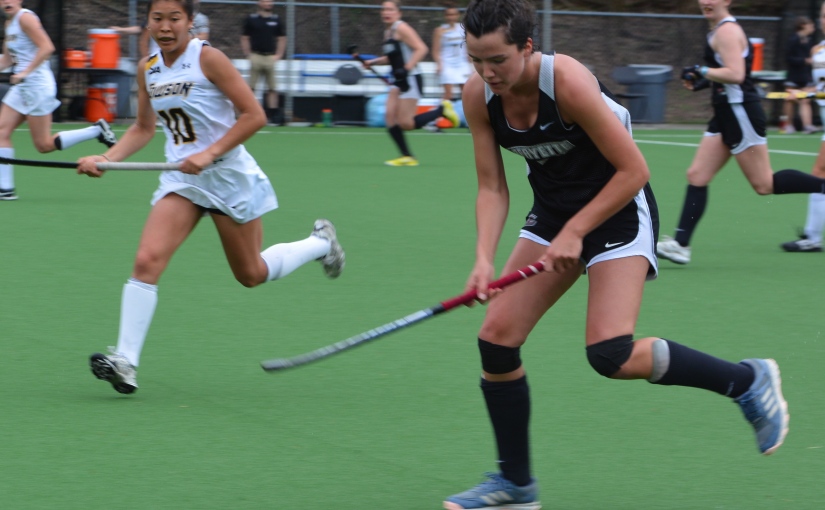 Audrey Sawer continues to fight for possession even as she goes to the turf!!

Audrey Sawers no sooner laid down her pen and bluebook after final exams, did she begin her journey to represent Canada on their Under 21 team. This rising 19 year old economics major will play tomorrow in Dublin Ireland at 16.30 local time against India in the first match of a four team tournament which includes a game against Scotland on Saturday at 16.30, and Ireland on Monday at 15.30. The medal games will be on Tuesday at 13.30 and 15.45. The tournament will be played at Pembroke Wanderers HC in Dublin.

Sawers has played in every single game of her career for the Leopards. The tall athletic midfielder will be playing defense for Canada. She earned the spot on the Canadian team in a series of games last year in Toronto and was picked by the national coaches having observed her first hand.

Sawers is a natural athlete having been named female athlete of the year two years in a row at her high school. Like many outstanding athletes she has played a variety of sports while starting on her field hockey team. Her sports included basketball, soccer, volleyball, and track and field!! She was named MVP in her provincial FH games.

She has been a key starter for the Leopards and one of my favorite players to watch on the field with her reach, speed and courage always on display. She wears number 16 for the Leopards but her red and white uniforms will display the number 22 as she shows her versatility on defense for Canada.

She will undoubtably be a key weapon in the Lafayette arsenal this fall. There are  2 team members who have qualified for the for the Women’s National Championship which will be staged at Spooky Nook in mid June. ( I will divulge their names tomorrow!)  The Championship could lead to selection on national teams. It is believed the Leopards will suit up 7 freshmen this fall to add to an already talented squad. The excitement is building!!