After last week’s showing what they are capable of, this week became shot of reality for our Leopards, after losing to Columbia University 6-2.  Lafayette gave up more goals today, than they had all spring, giving the Leopard coaches plenty of fodder to review with the team this week. This team is certainly capable of challenging for a Patriot League title, but winning championships is as much mental as it is physical.

Lisa van der Geest returned to turf after a week’s absence, and was her old self. Molly McAndrews was absent due to a bout of mononucleosis, Kara Tiedtke and Sophie Carr are still nursing knee surgeries. So there  was moving around with some players in unfamiliar positions. But there was a spark missing, which manifested in Columbia’s ability to defensively jump on the Leopard players , almost seeming to know where a pass was to go.

In addition, Columbia was to dominate the second half getting more corners and shots which eventually resulted in scores. Lafayette’s scores occurred in the second half with a penalty stroke by Van der Geest and a nifty deflection by Anna Steps. Whereas, the second half had limited scoring  opportunities, the first half was marked by missed opportunities.

Perhaps it was overconfidence, which should be a cautionary tale for the regular season. You must respect each opponent, lest you can lose games that should have been competitive. The Leopards seemed hesitant on passes, and failed to move after receptions, allowing the powder blue Columbia  players to take advantage. 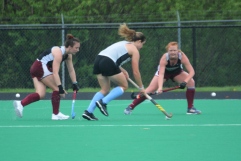 The game was played in a light rain virtually the whole contest, only to let up with a few minutes left to play. As the saying goes, it rained on both teams so the weather could hardly be blamed.

This is an opportunity to leave in the minds of the team, the reminder to play every game like a playoff game. There is nothing wrong with confidence but a lot wrong when confidence turns to being desmissive of your opponent. Spring is a learning period to learn a variety of lessons, perhaps this lesson might be one of the more important lessons to take into the fall campaign!!!

There is one more competition next Saturday…we shall see how well our Leopards absorb today’s reminder. Quinnipiac, Drexel and Villanova will travel to Rappolt Field for an 11:00 am start. I would not want to be any of next week’s opponents!!