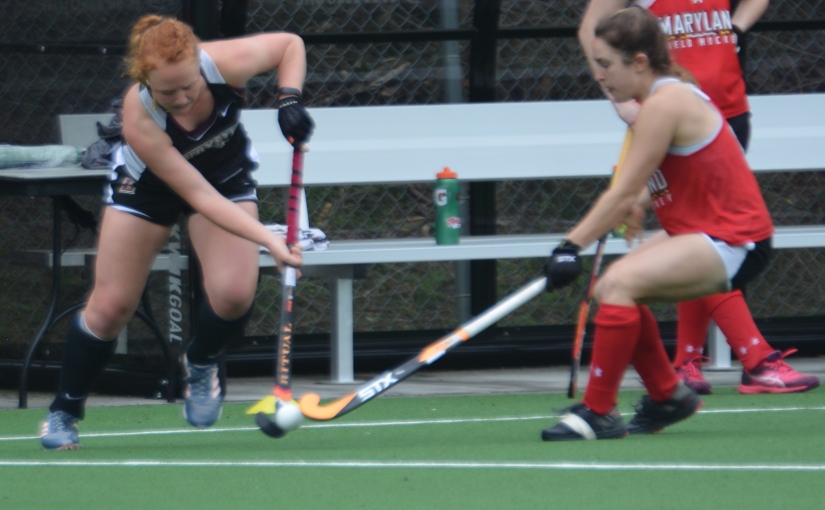 In the third spring outing for the Leopards, one could see the progress being made as the 2019 version of “Pard Hockey,” is developing a personality. There was a modification for the afternoon due to injuries for VCU personnel and a very short bench. They really could not field a full team so it was decided that in the games with VCU, Lafayette,  Towson and Maryland  would play 8 v 8 and a shortened field for the two 15 minute quarters.

However, all the teams were showing signs of vigorous spring training. Maryland came with four players unavailable ( I did not see Niki Lorenz on the field). Lafayette was missing 3 wounded, including their all American Lisa van der Geest who was sidelined as a precaution after suffering a mild concussion in the Penn game last week. Cam Costello was nursing a sore hip and shortened her time on the field. Sophie Carr was still rehabbing her knee and was in Florida representing the Patriot League at a NCAA student athlete conference and Kara Tiedtke was still rehabilitating her knee but was present  walking without any noticeable impairment. 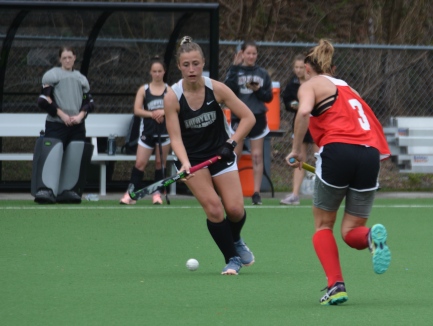 Despite the difficulties the Lafayette coaching staff had to walk away pleased with the afternoon. The Leopards scored 5 goals and gave up 2. They showed the ability to get second shots and used tip ins and redirections to great advantage. I was especially pleased with the hustle and tenacity on defense. Sarah Park may have had her best effort as a Leopard in goal which should have brought a smile to the coaching staff. On the afternoon Sam Di Maio  had two goals, one against VCU and one against Towson. Audrey Sawers, Grace Angelella, and Ana Steps added one each against Towson.

The game against Maryland which ended 2-0 in Maryland’s favor ( the same score from 2012 when Lafayette and Maryland last met) was highlighted by a strong defensive effort in front of the goal by a determined Lafayette defense. Lafayette had several chances to score but in many cases missed by inches, a defect I am sure will be worked on this week.

The coaching staff was not happy with the effort in the first game and the energy showed  in the first Maryland half as it ended in a 0-0 tie. The Maryland coaching staff turned up the volume in the second half getting several corners and converting two. The Lafayette side had several fast breaks that saw good chances go awry as connections were not quite made.

The last game was with Towson and lessons  from the Maryland game were applied in a 4-0 ending with numerous scoring opportunities bearing fruit. I have to hand to the team. They rose to the occasion and at least in this fan’s eyes demonstrated promise for the fall season. DiMaio of course had a good game but I must note a good effort from Eva Kaplan who had not seen any action in her previous two seasons and seems to be taking advantage of her opportunities. She contributed on the last score as she delivered a nice cross to Sam who tipped it in for the score.

Grace Angellela had a good game bringing the ball up the field and scoring as well. She played at a high level the whole afternoon. I wouldn’t want to diminish the effort by the whole team, especially after a slow start against VCU. The weather like the early play was a little cloudy but it brightened up as the afternoon progressed.

Next week, Columbia arrives in Easton for what I believe will be a regular four quarter game. I look forward to Saturday and seeing it all come together!! Go Pards!!