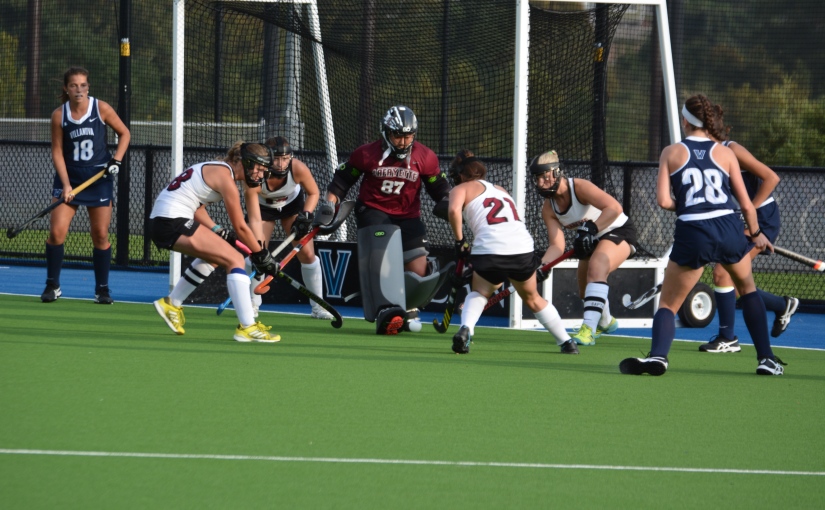 With several starters out with injury, and resumption of Patriot League play ready to resume on Saturday, the Leopards ignored adversity and ignited their offense against Big East foe Villanova at Villanova. It was perfect weather as the 5 pm game started at Villanova’s turf facility in Conshohockan. Both team were to begin the game feeling each other out, and as expected Villanova began with a press, and seemed to control the tempo and field position.

However, the Lafayette co-captains of Lisa van der Geest, Theresa Delahanty, and Rachel Bird would have none of it, and led the Leopards to a dominating first half, lifting Lafayette to a 3-0 lead. Defense and offense was clicking and corner execution, as well as corner defense were factors in the win.

Delahanty started the scoring at 18:30 into the game off a Lisa van der Geest assist that was the result of a rebound from the Villanova goalie. Delahanty was to get 2 goals in the contest and Van der Geest was to collect 3 assists, while playing excellent defense, and she was  a key playmaker in the backfield.

The second goal was from senior attacker Liza Welch at 27:35 assisted by Jen Delongis who had a terrific game stealing passes, and generally making her presence known to the Wildcats backfield. The Leopards finished the first period as freshman McAndrews tipped in an assist from Delahanty and Sawer, on corner a with less than a minute left in the first period.

It was a hard fought first half with plenty of physical play, including a tremendous collision between Leopard goalie Sara Park and two Villanova players. Park was not giving an inch in the circle, and defended her turf with “Leopard Pride.” The refs were forced to stop play as all three needed to recover.

Villanova was not about to give in easily as they opened the second period with two quick goals from Riley Dolan at 37:39 and Megan Vermiel at 38;31. With score now 3-2 the Leopards redoubled their efforts and took back control as Delahanty slipped the ball past the goalkeeper at 45:54 for her second goal of the game using Van der Geest’s second assist. It was not to end until Grace Angelella also used a Van der Geest’s thirst assist on a corner for the “coup de grace.”

Villanova pulled their goalie and the Lafayette defense held firm and retired from the field with the 5-2 victory. This was a perfect warm-up for a crucial matchup on Saturday with the Raiders of Colgate. A win would put the Leopards in good position a slot in the Patriot League playoffs. Playing at Colgate has always been an adventure for the Leopards, and the emergence of a solid offense is a great boost to the Leopard’s chances on  Saturday.

The corner offense today was key as 4 out the 5 goals were part of corner opportunities. Persistent play after first shots was also key, as it all seemed to click for the win!.