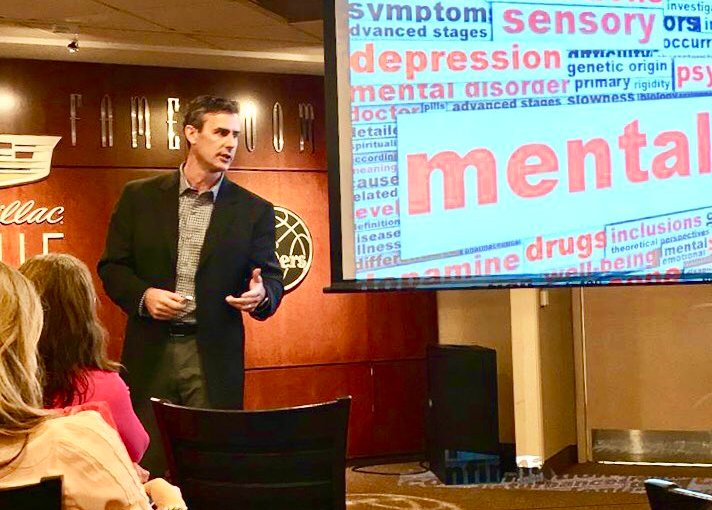 Last week I spent several hours with Dr. Jarrod Spencer, nationally recognized sports psychologist. Dr. Spencer is the author of “Mind of the Athlete—clearer mind, better performance.” Amy Swenson, two time olympian for the US Field Hockey Team writes, ” Any athlete who wants to take their game to the next level should consider the mental concepts in this book. Dr Jarrod Spencer will improve your performance.” In the forward  Matt Millen four time super bowl champions says, ” What gets overlooked in training, for the most part is the mental aspect, which is far more important than the physical part.”

Sitting in his office, Jarrod opened with some astonishing statistics regarding stress on college campuses assembled by the American Psychological Association.

30 PERCENT : the percentage rise in students seeking appointments at counceling centers between 2009-10 and 2014-15 even though there was only a 5% increase in enrollment

Also almost equally alarming is the number 56 percent….The percentage of of counseling center directors who say their professional identity is psychology. Thirty percent say it is social work, 10 percent other, 2 percent higher education administration , and less than 1 percent medicine and nursing.

These statistics cover the general student body and not in isolation the competitive athlete who experiences stress at a much more intense level. In most cases the student athlete’s most important contact for mental health is their coach. But what if the coach is applying the wrong solutions and increasing stress? It is he or she that may be the problem. Coaches at the collegiate level are not required to register for course taking and  certification by authorities to recognize mental or physical abuse like secondary school coaches or even scout leaders.

Dr. Spencer points out that many Division one schools are hiring Directors of Sports Psychology, a position like other medical related training position and have a separate reporting stucture outside of the athletic department. These LICENSED psychologists not only could work with athletes but with coaches so early intervention and coaching techniques could be used to avoid serious issues.

The NCAA recognizes this as a serious issue so what are the obstacles??  Funding is the simple answer, but money seems to be found most everywhere for other priorities. In many cases, referrals are available, but there is no ongoing secure monitoring going on in most athletic programs.

Dr.Spencer works with professional, Olympic, college, high school athletes and coaches and teams across the country. Teams he works with include, University of Maryland, Old Dominion, and Lehigh . He has also worked with individual athletes from the University of Michigan, UNC, Ohio State, Princeton and many more.

He is available in the Lehigh Valley at his company office of Mind of the Athlete 3400 Bath Pike Suite 302 Bethlehem, Pa 18017. Tel 610 867 7770.  His email is drjarrod@mindoftheathlete and his web site is http://www.mindoftheathlete.com