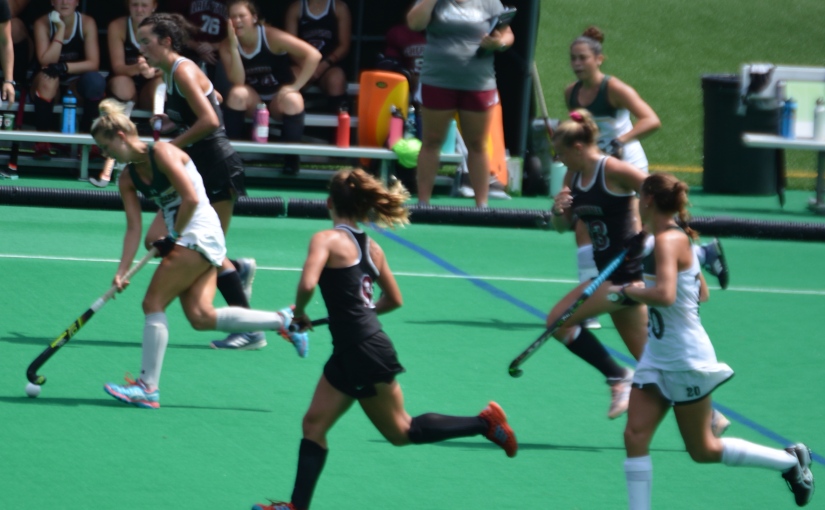 It was a determined Leopard squad that opened play in the first half at Williamsburg against William and Mary. In the first period Lafayette outshot the tribe 8-6 and out cornered them 3-1. Both teams battled the noontime heat and humidity, but fans were treated to an attacking, aggressive style.  There was  an initial goal by William and Mary at 28:46 by  Estelle Hughes from the Tribe who got the ball high on the circle and using a reverse chip shot lifted the ball high into the back of the cage.

Lafayette was not about to lie down in front of this nationally ranked team and responded 3 minutes later with a Molly McAndrew rocket that wizzed past the goalie for the first goal of her collegiate career. With the score knotted at one it looked like this might be a real battle.

That goal seemed to deflate the Leopards as the second half was not as productive. There were points where Lafayette looked like they might break through but just could not connect to get. the goal. William and Mary used excellent teamwork as they scored 2 more goals at 43:15 and 52:39. In the second period, the oppressive heat slowed things down and Lafayette gave up 9 shots to 3 while they were blanked  on corners 1-0.

The beauty of the game of field hockey is its team aspect. Three of William and Mary’s goals came with assists resulting in deflections and tap ins. There is no such thing as give to the star and let her score. Like most team sports every goal, every win is created by team movement. We began to see that in the first half and perhaps we will see more of that on Friday against Temple. The second thing that makes a sport like field hockey exciting is that there has to be risk taking to score and win . A team that continually looks for the “safe” pass will never see numbers light up on the scoreboard.

Although this weekend was not the result we hoped for, I think the leadership on this team is beginning to move it in the right direction. So ladies be fearless, believe in your teammates and yourselves and good things could happen against Temple on Friday.

I do have difference makers for this game. First, Lisa van der Geest was directing the play all game and encouraging her teammates to move forward. In addition she took 7 shots . Second I like the play of Kristen Taylor who was effective on both sides of the field. Ana Steps was an additional force on the field. Third or Fourth Molly McAndrew is getting better every game and will mesh together well with this team going forward.

So Friday at 7 pm at Rappolt Field and also broadcast via LSN.