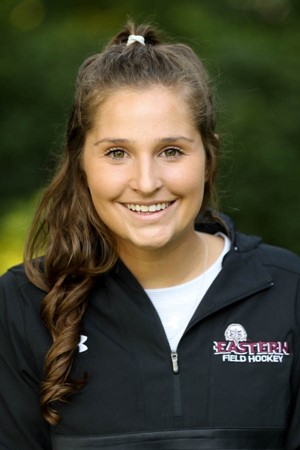 Jaclyn Hibbs is a former all conference and all region selection from the University Albany and I have learned she has agreed to join the staff of Lafayette Field Hockey. Jaclyn comes directly from Eastern University, a division three school where she was responsible for improving the defense. Hibbs played defense at division one University of Albany, a frequent opponent of the Leopards.

Jaclyn was a member of the 2016 Albany team and earned all Northeast Region honors as well as all conference honors as a senior. She was a defensive specialist on her  nationally ranked  squad. The 5′ 1” star hails from North Wales, Pa. and played for  a local club team.

In 2014 she was named to the U-20 national team. I am assuming she will have defensive responsibilities but I was unable to confirm that at this writing.

In addition, the Leopards have added a German player on the squad and at this writing her name was not posted on the roster. Her name is Kara Tiedtke.  Her sister plays for the University of Connecticut.Welcome to our field hockey family, Kara. We are pleased you decided to join us!!