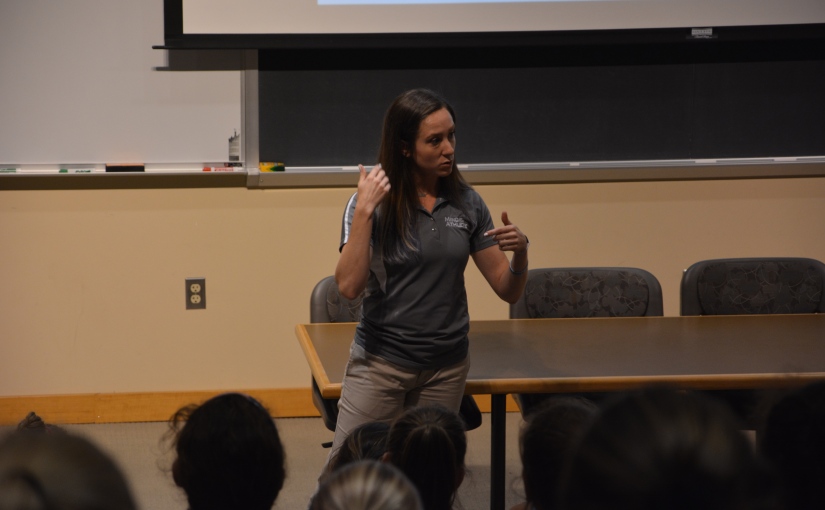 Coach Jennifer Stone who runs the Total Field Hockey Camp at Lafayette College had her student athlete campers trade the hockey turf for the classroom, for an hour on monday. The group of over 100 high school and rising college athletes marched into Oeschle Hall, the headquarters for the psychology and neuroscience departments at Lafayette, to hear Dr. Megan Cannon, a sport psychologist explain how to improve their mental health and  achieve peak performance as a student athlete. She works for Mind of the Athlete,  a sports psychology consulting firm. They consult with many schools including Lafayette to help foster an environment  of positive communication, encouragement, and cohesion to achieve success.

Dr. Cannon competed in swimming, softball and basketball as a youth, while also performing on the stage in ballet, jazz and tap dance from the age of three through college. She brought these experiences, along with her educational background to help today’s student athletes, deal with performance anxiety, nervousness, and many other obstacles to maximize performance on the field and in life.

One of the first tips was to suggest to athletes that they visualize their ideal performance, scoring that difficult goal, making a save, or the perfect pass. Visualization is important in all sports and help your mind and body to perform without conscious thought. She also discussed how to deal with bad play or mistakes and how to get over it. She introduced the idea of using a mantra to overcome nervousness and to even increase team unity.

Questions from the floor included the ideal amount of sleep required. Dr. Cannon reemphasized how important sleep was to be at you peak. ” Anyone who says they do not need sleep is lying,” she said. There was a question of naps and what was the ideal time for a nap. (26 minutes). There were suggestions to reduce pre-game anxiousness  by doing some rhythmic breathing.

Finally, she brought up the real case study of a student athlete. He was a wrestler at a major division one school and during his undefeated career won 136 straight matches. She attributed part of his success to his major….art. He would draw pictures of wrestlers in imagined holds. It was this exercise that helped him visualize his success on the mat. Dr Cannon then did an exercise where she had her audience draw themselves on the field doing a good play. Several shared their brief drawings with the assembled class.

The group left with additional tools to help deal with the pressures of being a student athlete and to perform their best on the field and in the classroom.