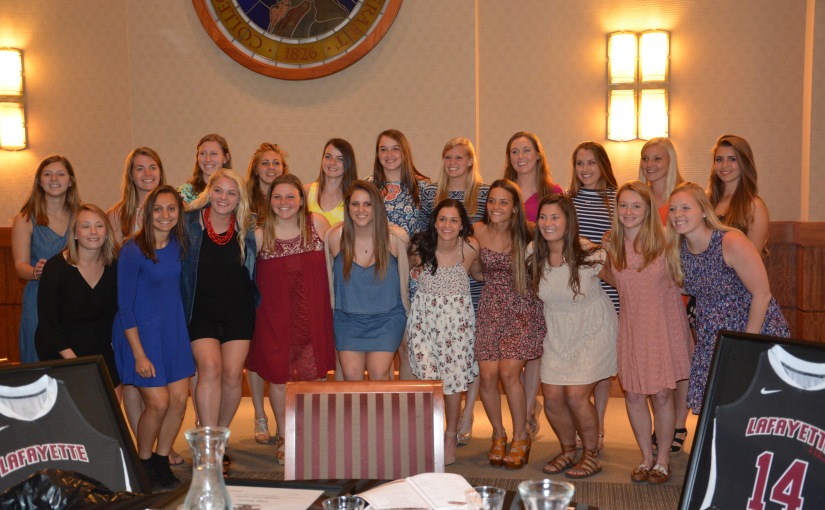 It’s a little over one month before the team reports for the official preseason camp. In the meantime, the independent team camps are due to start. Open to all high school and college players, many of the rising first year players will take advantage of the extra instruction, while the veteran players and coaches will act as camp councilors and teachers.  In the meantime, captain’s practices will be in full swing as the melding of the team begins to take place.  All the players will have received a regimen from the strength and conditioning staff to make sure that on August 11th the team is ready to get on to the serious business of designing schemes and lineups.

Six days after reporting in August, the 2016 Leopards will travel to Rutgers for its first taste of collegiate competition, and 6 days after that Columbia will be the final tune up before the team will tackle the regular season with Fairfield University, on August 26 at 6pm at Rappolt Field.

Senior leadership is important as they will set the tone and help bring the team together, leading by example and encouragement. This is the first class in four years that has not experienced a championship in their previous three years and they will want to do everything possible to earn that championship ring.

I contacted two of those leaders several days ago and asked them to write to me and explain what this coming season means to them, and what the team must do to have a successful season. Amanda Magadan, a first team league selection who for the past  year has been playing for the US under 21 team was the leading goal scorer for the Leopards, and her skill is quite evident on the turf. Kaitlyn Arnold is not only a Phi Beta Kappa student but is also an all league performer in the goal for the Leopards. She had the most shutouts of any goalie in the league.

Amanda wrote, ” If we want to be successful in the upcoming season, we need to work hard, be persistent, and believe! Our goals will be accomplished not by luck, but through our hard work on the field and our ability to learn from our mistakes. There is no doubt that as a team we will be faced with obstacles in the upcoming season. Maybe we are down 2-0 in the second half, but how will we react? Will our bench get louder? Our players sprint faster? Our choice to unite, believe and overcome the challenges in front of us will define our success. As a rising senior, I sincerely look forward to beginning our journey as a team and watching us grow and accomplish tons!”

Katilyn struck a similar theme in her response,” I think this can be a huge fall for us. We have a really strong group with a lot of talent. Even more than that , we’ve made huge strides as a program on developing out culture and I think that can pay dividends in the fall season. In the offseason, we’ve worked on creating an environment that breeds and encourages hard work. To be successful in the fall, we need to keep this environment as cornerstone of our team culture. If we work hard and play tough and with grit, I think we’ll be able to play with anyone.”

Along with their fellow seniors they will lead the team and will dare  their teammates to be a winner. Coach Stone remarked to me at the end of the spring season that this team didn’t want to leave the field after the last practice. The “journey” begins!!!