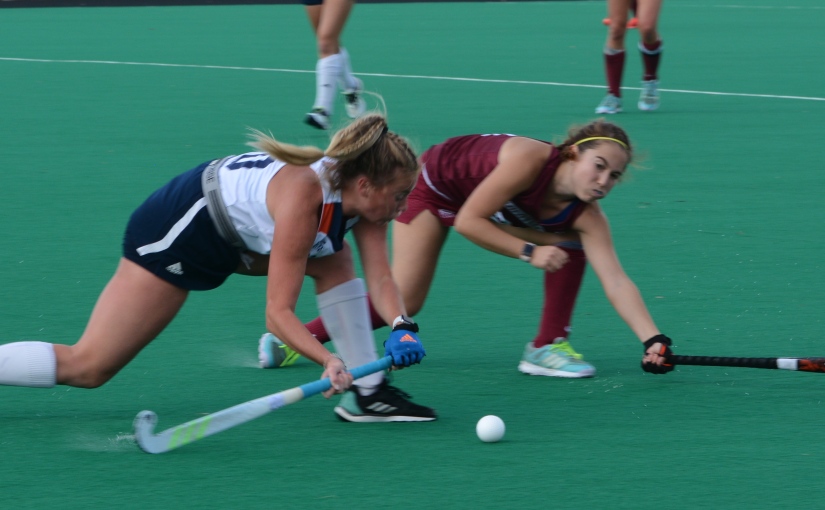 This game was billed as having no consequences for Bucknell. They would be part of the middle seeds, no matter what, but for Lafayette it was a 2 seed or a 4 seed playing the number 1 seed American. This was championship hockey for both teams with the skill and tempo of a late season rivalry game. With 1:49 into the second overtime Leneke Spanns started a 2 on 1 break towards the Bison goal. She spotted Audrey Sawers positioned perfectly and passed the ball allowing Sawers to bury the game winner and sending the Leopards to a repeat game on Thursday and a Lehigh meeting with number 1 American University.

The game started out with a neat break and tip in from Alix Talkow off a pass from Spanns giving the Leopards an early lead. But Bucknell less than 9 minutes later, was to execute a corner with feeds from Kile to Mackenzie, to Kaur, to Noor and finally to Stefanowicz knotting the score at 1.

It was to remain 1-1 until Spaans sped into the circle for the Leopards pulling around and scoring a solo goal 8:39 into the second period. The score remained 2-1 at the halftime break.

With less than 3 minutes to go in the game Emily Doyle tied it for Bucknell with an assist from Reanne Burgess and the game went to OT.

The first overtime was to see Lafayette gain an upper hand with 3 shots for the Leopards and none for the Bison. The second overtime again saw Lafayette with 3 shots to none for Bucknell the final shot being the winner from Sawers.

The tale of statistics had the Leopards with a 21- 13 shot advantage while Bucknell had 6-4 lead in penalty corners with 3 in the third period. Hailey Abbott had another great game with 8 saves many at critical times.

This was another character win as the Leopards needing the team as a whole to step up. Play by a returning Simone Hefting and Shea Balderson, whose 60 minutes were played with great skill and intensity. Lafayette used only 4 substitutes while Bucknell used 9 from their bench.

The PL tournament looks to be the most balanced and talent filed field in my memory. In the meantime, Lafayette will be playing the number three team in the nation in Rutgers tomorrow while Bucknell will be meeting Drexel.