Holy Cross will be graduating five seniors this spring but none more important that Marcia LaPlante their excellent goalkeeper. Coach Lindsey Jackson seems to have a strategy to go to very successful programs to pick recruits that know how to win. To do that there are reported commitments from Maryland, New Jersey and Massachusetts. She will also need to improve her goal production since they only scored 29 goals last season. The Crusaders have not yer reported their NLI signings yet, which indicates to me there may be more coming. There big goal scorer is junior Micke Kooman from the Netherlands who scored 1/3 of the goals all season. Jackson has tabbed another GK who hails from the  Boston area which means she again will carry three GK.

Ryleigh hails from the very successful Garrison Forest School in Maryland and also played for the Freedom Hockey Club. Garrison plays a very tough schedule even going out of state from time to time. They always seem to be in the hunt for the IAAM championship which they won this past season. They were ranked 24 in the nation by Max and 4th regionally.

Aside from Field Hockey Ryleigh runs the 800 meter in track during the spring. But Field Hockey is where she excels. The midfielder was the team captain of these champs, and was second team all metro selected by the Baltimore Sun. She started every game for Garrison. 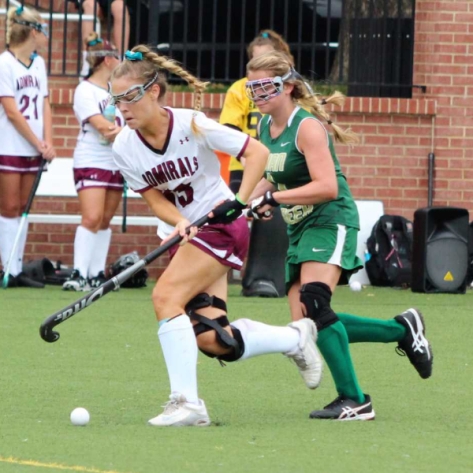 Haley is another midfield defender from Maryland. She was first team all conference and a Maryland all state selectiion. She will graduate this spring Severn High School and played for the Sparks Field Hockey Club. She is a two sport athlete playing Lacrosse as well.

Brook will be a freshman Goalkeeper. She went to Winchester High School in the Boston area. She was also Captain of her team and a League all star. She highly competitive and has play field hockey even before high school. She says she likes the GK position because she likes to be in middle of important plays.

Kylie is a New Jersey native who played for the Oak Knoll School, another very successful  program. She hails from Summit New Jersey and will be a midfielder or defender at Holy  Cross. I was unable to find more stats on her but I am sure the coaching staff in Worchester will be providing details soon