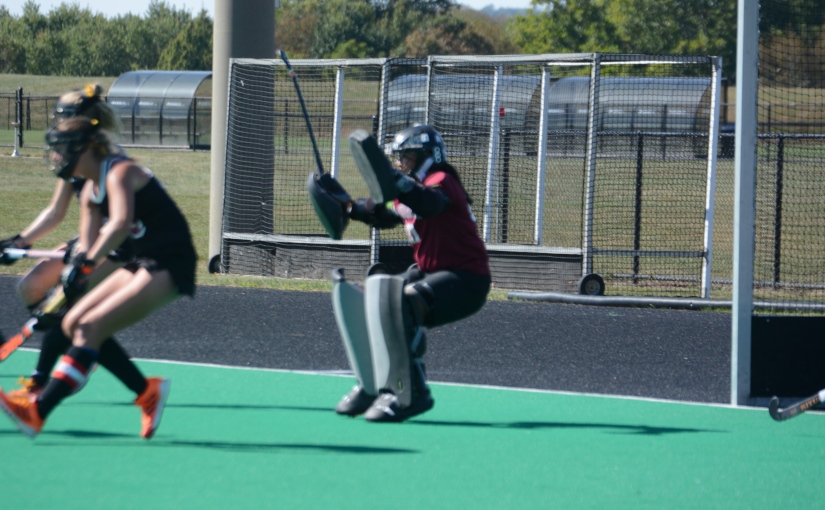 In probably the most exciting game of the season to date, the Leopards stood tall, and in a combination of a good game plan by Coach Stone and her staff, great execution by the players on the team, and some outstanding individual effort the Leopards overcame fatigue, and an worthy opponent to win 2-1.

The winning goal from Molly McAndrews, last year’s rookie of the year, finished a bruising and hot afternoon of field hockey in the second overtime, as each team looked for an advantage in the 7 v 7 format. The winning goal came from a feed from team captain Lisa van der Geest. ” I saw Molly open in front of the cage and I could see she wanted the ball. I was able to get it to her on a one timer and she finished.”  Van der Geest, who last year received all-American honors , switched to center mid, after conferring with head coach Stone several minutes before, and it was that change that was to put the Leopards on track for the win.

Cameron Costello Gets The Tying Goal

It was Costello’s first goal of the season that put the Leopards in position to get into overtime. Monmouth had scored 13:04 into the game and the tie stood up through the first half. However, four and half minutes into the second half Cam found the ball during a scrum and got the unassisted goal tying the game. The tie was to remain  for the  rest of regulation time, setting up the overtime.

Park had 3 saves during the contest, but more to the point, they were crucial if not spectacular, coming out from the cage and cutting off potential attackers before they could get off a shot. In addition, Audrey Sawers playing defense had a defensive save as well!!!

This was the first win over a ranked opponent since 2016 according to goleopards. The Leopards will now move on to Boston to play league pre-season favorite Boston University in Boston on Saturday. The Terriers lost to UConn today 4-0. On Sunday, the Leopards will have another back to back weekend playing another game with Bryant, at Brown in Rhode Island. No doubt the team will have  put this weekend’s triumphs behind them as they prepare for this important league game.