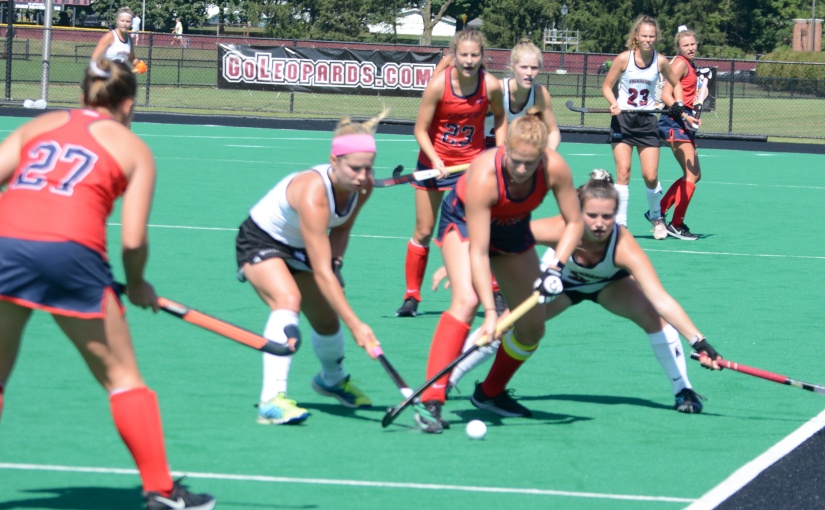 Lafayette and Holy Cross will meet at Rappolt Field to open their Patriot League Schedule  on Saturday. Recently, this has been a crucial game for both teams in regards to a playoff position. There are seven teams in the Patriot League and four will qualify for post season action. So, to assure a place at the end of the Patriot League season a team must have four League wins in all probability. Recently these games between the Crusaders and Leopards have been very competitive, and both teams will be pulling out all the stops to win this game.

Holy Cross loves to fast break, and the Leopards have displayed a strong wall on defense. Holy Cross, at 2-3, has their two wins against first year Division One team Merrimac and 1-6  Sacred Hart. Interestingly, Holy Cross had 62 shots combined in these two games out of the 101 taken so far this season. Their shot percentage is 8 percent. Their loses have been to Northeastern, New Hampshire, and Dartmouth. Their highest goal total was against Merimac in a 3-0 effort with senior Lexi Tilton (number 4), their leading scorer, getting the hat trick! They have scored 8 goals in their five games.

It has been defense, that has been the hallmark of Lafayette’s record to date. They have played two ranked teams, Syracuse and Liberty. Losing in overtime to Syracuse, and Liberty  5-0 in Lynchburg on Sept 8. The other two loses were at the hands of Appalachian State and Providence in a shootout.  Lafayette’s two leading scorers are Sam  DiMaio and Felicitas Hannes, each with two goals.

Lafayette’s shot percentage is 12 pct while Holy Cross is 8 pct as I recorded up above. Holy Cross has 36 penalty corners in five games, Lafayette has 27 in six games. No doubt, the coaching staff at Holy Cross likes to attack and set the tempo early. Lafayette runs a structured and disciplined game. Fans will appreciate  that the early going will  prove to be crucial and a good start by either team, will be critical to a win.

Unfortunately. it appears there will be no live stream . So come on out. An army of Leopards  in the stands could make the difference in this important game.