Wading through the NCAA gobbledygook, pre-season practice for division one field hockey may start about 21 days before the first game. So counting backwards from the Leopards August 30 game with VCU, our Leopards and the rest of the college hockey world should be on their turf with two a days as I write this. I have heard some of our more disparate team members started arriving last Thursday. For the players it may seem like a long time to prepare for the season, but move in and orientation for new students is Aug 23 with classes starting Aug 26. So, for our seven new first year players, it will be a short time to get used to new teammates and the rigors and demands of a division one sport. 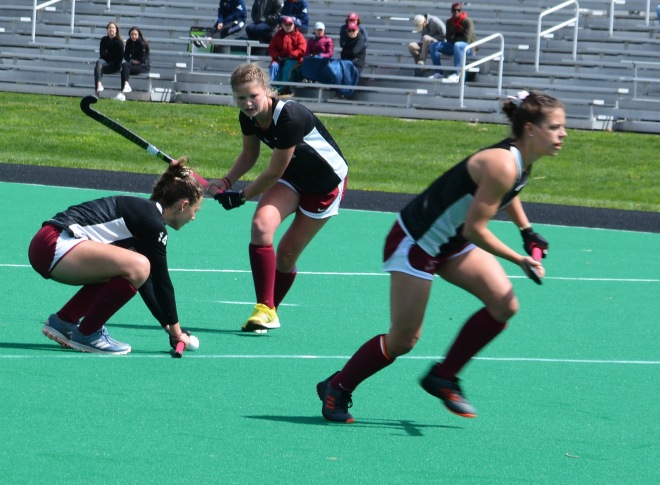 During that time, there will be two scrimmages as well. It’s a challenge for coaches as well as players. The coaches must decide where everyone fits, and to see where players best complement one other. Likewise, players need time to adjust. Field Hockey is fluid game and so much depends on the mesh of the players on the field. For our first year players the speed of the ball and the movement of teammates will be a challenge.

Fitness is important, but the time is past to worry about that. If, as a player, you haven’t prepared yourself, it is unlikely you will be able to keep up with the other mental demands of preseason. Psychologically, for new players, the adjustment will be harder not having the benefit of a spring season. But I have seen many of them play at Spooky Nook, camps and national competitions in their home country. Coach Stone will be pleased with her addition of 7 solid players.

If past is prologue, families have dropped off their offspring, amid tears and cheers. The fun part of pictures and first team meals are already in the books and first beep tests, mile runs and other fitness tests are already endured. It is only 6 days before they will see their first college competition of the year at Fairfield, and we will get our first legitimate glimpse of 2019 Leopards in action.

This could be an EXCELLENT team, but that may well depend on the next two weeks….. “effort in.. equals results out.” In the coming days, there will be meaningless preseason picks ( I will save my comments until after that release), but I fully expect Lafayette to be picked in the top four and eligible for post season patriot league play, anything less would be a step backwards. The league will be interesting with two teams ( American and Lehigh) bringing in 10 or more new players. Colgate will be playing a largely veteran team and the always tough Boston team looks at least as good as last year. Holy Cross has always been a thorn in our side and Bucknell is always ready. To my cursory observation  though, there is no team on this schedule that Lafayette is beyond being successful against. More about that for later articles!!