Canada used a well executed corner in the first half and a second goal from the field in the second half to come out with a 2-0 win over the US team. US fans no doubt were looking for the second half surge that characterized the previous wins by the US, but it was not to happen. Captain Kathleen Sharkey was right on point as she described the Canadian counterattack as a key difference in the game.

Canada got their first goal off a corner with a well executed shot by Karli Johansen in the second quarter. The US responded with several close chances but just couldn’t find the connections to result in the tying goal. Both teams came out with purpose in the second half, as the US again saw several close chances, but didn’t find the back of the cage. The US goal keeper Kelsie Bing was kept busy, and made several close saves. But as the half wore on, Canada did again find the goal by the way of a shot by Madeline Secco.

It was after the second goal, it seemed to me, the US got more and more desperate and there was a lot of individual effort to spur a comeback. But all credit to the experienced Canadian defense as they seemed to be everywhere, tackling, blocking passes and closing spaces. 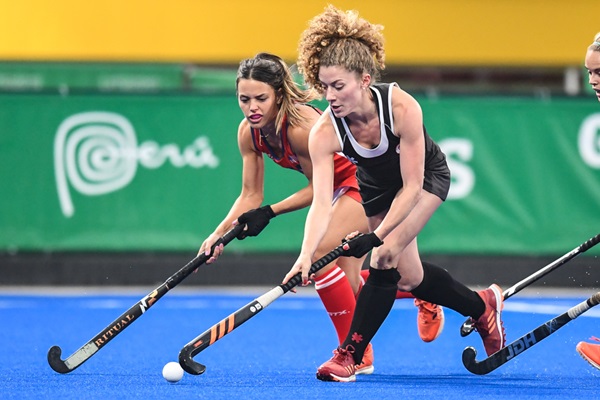 Canada now moves on to the finals and a shot at an Olympic berth, and US will play Chile to capture a bronze medal. This will be the rubber match with Chile, who showed their skill even in a loss to the US in the Pool B match up. Coach Shopman expressed her disappointment, but resolved to do her best to keep the team together for a final medal opportunity.

Again, experience was the key in the game and although individually talented, this young US team must find ways to stay together, and develop, to reach it’s full potential, I believe.