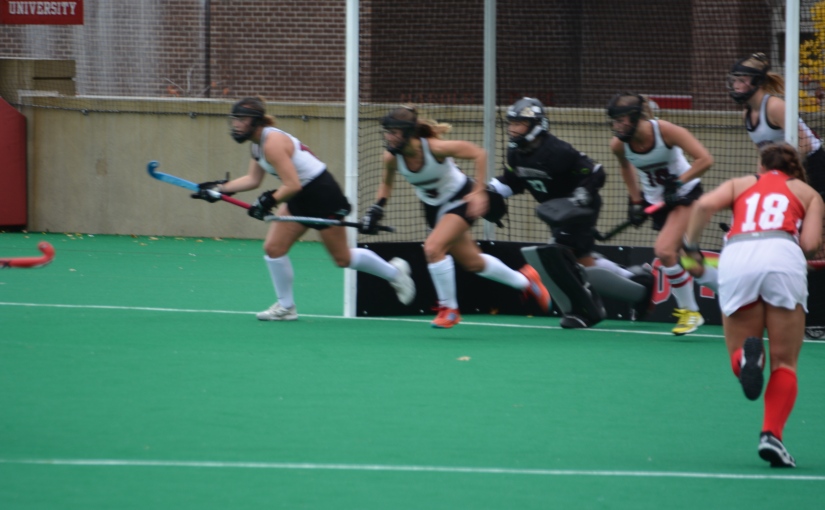 I hate to say a  team “deserved” to win a game, but if there was a situation that called for that observation, this was it. The Leopards battled like champions, showing all the skill and heart they displayed in the last part of the season. The Leopards had 8 shots to Boston’s 13, but out cornered them 3-1. Lafayette turned away the Terriers time and again with their gritty defense, and an exciting offense. Sure, there were several questionable calls, as happens in many games.  Petra Hall of Boston University in the end connected twice, the first at  19 and 1/2 minutes into the game and broke the one one tie with six minutes left in the game.Caroline Turnbull had tied the game at 24:49 in a scrum after a corner that seemed to go on for 10 or 20 seconds.

Sarah Park was magnificent in goal, as freshman Ally Abbot was brought in after a call for a stroke in the first period.  The freshman stood tall and stopped the Alley Hammel shot preserving the tie. The call that lead to the stroke was a mystery to most, as it was called against the goal keeper inside the circle. ‘

In the second half Molly McAndrews, rifled a shot that deflected off the body of a defender in the circle, To mosts people, a stroke was called for, but never happened. Lisa van der Geest was used at the kicking back position at the end of the game, but the Leopards were unable to take advantage.

Rachel Bird played a key role on the defense not only turning back Terrier plays, but initiating passes through the use of her strong hits. Sam ‘DiMaio was strong on the offense as well. Freshman McAndrews was a presence, driving and going toward the goal. Theresa Delahanty showed her courage and skill on both sides of the field making plays all game long. Lisa Welch showed she could mix it up with the vaunted Terrier defense. Kristen Taylor was her classy best, and calmly helped direct the midfield and attack.

The Leopards return many from this team next year. There will be a thirst to return to the playoffs for a little revenge. Perhaps next year they will skip the slow start they had this fall.

All in all, they performed like they belonged there, and perhaps a run for the title will be in their minds next year. Our senior’s play and their loyalty to their teammates will be something to build on in the future.