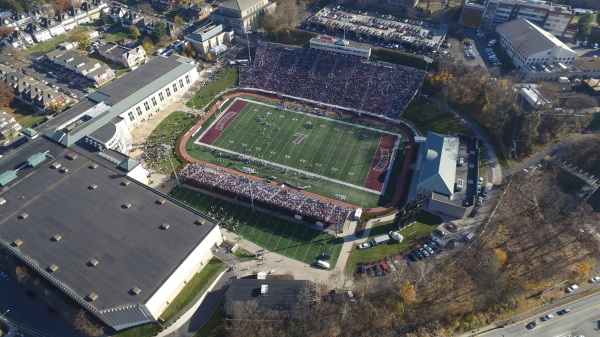 The president of the United States has Air Force One, but Lafayette will load up its version, which I will call Leopard One in three weeks, to let Lafayette fans meet and greet the new AD, Sherryta Freeman. The Lafayette team bus, leopard logo, and many of our senior athletic department administrators and coaches  will hit the road to take our athletic dignitaries from Easton to stops in the Lehigh Valley, Washington D.C. and The Radnor Hotel, outside of Philadelphia to answer your questions on the future of Lafayette athletics. The trip starts on April 25 in the Lehigh Valley at 6pm. It’s the same venue as the Lafayette vs Penn State baseball game at Coca Cola Park in Allentown. So a great game against a big opponent in a splendid venue, after work, and a chance to get a question or two to the new athletic director.

Finally, they turn north and outside Philadelphia for an April 27th panel at the Radnor Hotel. Aside from Freeman, Damon, Stone,and Garrett, Andrew Radmicki ( director of basketball operations ) will answer all your questions. The time will again be at 6pm.

Sherryta Freeman has been on the job since February 19 and has certainly begun to form her initial impressions of her task at hand. She is interested the views of alumni and parents about the state of Lafayette athletics. Since her hiring, I have been flooded with questions about her plans. This is a chance for our most important fans, those that have an intense interest in the success of our athletic programs to ask those questions that have been saved until now.

I interviewed Ms. Freeman during the search and you will find her smart, ambitious, and  looking forward to the challenge. A graduate of Dartmouth as a championship athlete, she understands the need to win. During my interview with her, the word WINNING started every thought. She can take over a room as she enters… as you will see..

But this is a chance for YOU to get it straight from her. Ask the tough question. Think about her answers, and listen to the other questions to see where we are headed. It is also time to do the same to the other panel members!!

At this time in the history of Lafayette athletics, there is no more important moment to get the straight story of where we are, and where we are going. So follow Leopard One and get all your questions answered .

To attend any of these events  register online via goleopards or call the Maroon club at 610-330-3116. I will be at the Radnor event!!