As I write this article,  Lafayette College is in the midst of a search for a new athletic director. Bruce McCutcheon, the current AD is retiring and all indications are the new AD will be in place by the beginning of the new year. Dr. McCutcheon has seen an evolution in sports not only at Lafayette and the Patriot League, but in college sports programs in general. The effects of Title IX, needs for improved facilities, and the advent of merit aid in the Patriot League has had the effect of altering the landscape for Lafayette  and colleges similar to it.

By all measures, the facility issue has been gradually addressed. Lafayette has met those challenges with field, locker room and infrastructure improvements through the generous support of an active engaged alumni donor base. That improvement has been broad based, respecting every sport and it’s participants. Not only have we seen upgrades in the “major” sports, but virtually every sport has seen the impact of capital improvements over the last decade. 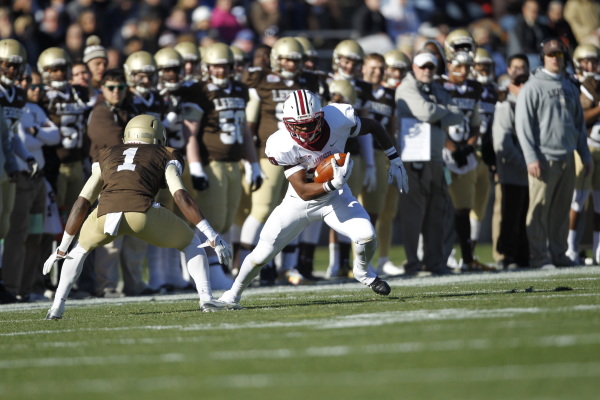 The last 20 years have seen major improvements in women’s sports facilities, not only because of the requirements of Title IX,  but because it was the right thing to do. I graduated in 1967,  women did not arrive until 1972, and progress in that area was slow and grudging. However, by the turn of the last decade, due to administrative attention, women’s sports have received equal attention.

The evolution of the school to merit athletic aid has not been as smooth. As the league adopted merit aid, Lafayette was not only slow, but the debate caused harm to the experience of student athletes during the era. One could not expect Lafayette student athletes to compete in a scholarship league without the ability to offer excellent student athletes the same opportunity as other schools in our peer group. We were the last to adopt athletic scholarships in the Patriot League.

The debate was bitter, and it still has its internal wounds on the psyche and culture of the school. However, even the most diehard opponents have come to see that our present student athletes represent the best of us. As a group, their GPA is higher, and as alumni they are stronger givers as they succeed in life. Student athletes are more in demand in the job market, and as a group they receive higher starting salaries than other students with the same GPA. By every measure, they are good citizens, and strong representatives of Lafayette to the outside world.

However, there is a missing piece. It cannot be said that we have a complete program without success on the field. Yes, we have had Patriot League Football Championships ( the great win over Lehigh in Yankee Stadium was a highlight even though it wasn’t a championship year), NCAA appearances in Men’s Basketball, two back to back League Championships, NCAA appearances and  national rankings by the Field Hockey Team, but in the last five years a winning record in any of our sports has been a rare occurrence.

Somehow, the mention of winning has not appeared in the goals and mission of the athletic department. Our student athletes are entitled to that goal, and consistent failure to reach those winning goals can impact everything that follows, fundraising, school spirit and yes, even recruitment for non athletes.

We have met challenges in the other successful elements of our sports enterprise. We must now fearlessly make winning a clear objective, not winning at any price, but by also upholding our standards and culture. There are those who may say we cannot accommodate winning and our character. To those, I would point to the schools with the most NCAA championships…Stanford and Princeton. Not that shabby I would submit.

We are in the right league that has the right values, and it is in our best  interest to find a way to succeed. This week we will be interviewing the final candidates for AD, I want to hear him/her  say FEARLESSLY, that winning will become part of the mission statement and there will be plan to get us there. The new AD should not do it to impress a boss, or make other college employees happy, but to support our student athletes in meeting their goals and give them an experience worthy of their effort and abilities.

The last interviews are this week. I look forward to the outcome. Outside of President this is the most important appointment the college can make!!