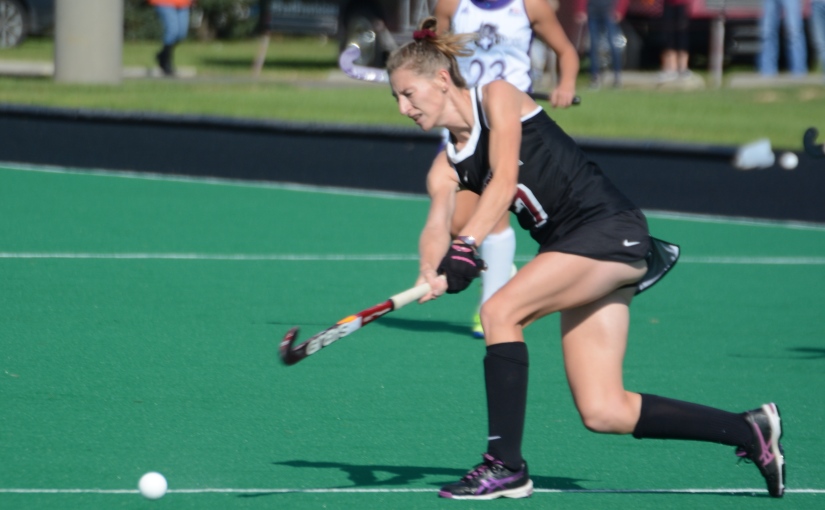 The dreary day we had here on the east coast matched my mood. It would be the last game of the season, having lost on the previous day 1-4 to Holy Cross. The rains were torrential at times and both my wife and I were battling colds. Therefore, since the game was to be live streamed we decided to stay at home. Unfortunately the live stream was washed out. Fortunately, the team was far more resilient than us and dominated the Temple Owls to finish the season with a 4-1 win. The statistics and score unlike the previous day, the domination of the Leopards was clear. Lafayette had 20 shots to Temple’s 11. They out cornered the Owls 12-4 and forced the Temple goal keeper to make 9 saves. Sarah Park had 5 of her own for the Leopards in the cage.

Freshman Audrey Sawers started the onslaught with 11 minutes having run off the clock delivered an unassisted goal to give the Leopards a lead they were not to give up the entire game. The 1-0 lead was to hold up for the entire first period as the Leopards had a slight edge in shots 8-5, but a significant advantage in corners.  It was Sawers first goal of the season and her career.

As the second period opened senior Rosie Shanks was to remind everyone of her scoring ability, getting her fifth goal of the season with only 4 minutes having run off the clock assisted by sophomore Caroline Turnbull.

Temple was to take advantage of a green card on Meg Lillis and score one minute later closing the margin to one.

The Leopards would not be denied this day, when in the next six minutes there were shots by senior Ellen Colbourne, freshman Audrey Sawers, sophomore Liza Welch,  and sophomore Caroline Turnbull. The unrelenting attack ended when the Leopards earned a corner and the battery of Lisa van der Geest and Anna Steps was to connect again as they had in the last two weeks earning the sophomore van der Geest the assist and freshman Steps her fifth goal of the season.

Despite a Temple timeout and urging from the Temple coaching staff,. Lafayette was to gain another goal in the 64 th minute after a corner attempt and shot by Sawers only to have it collected on the rebound by Junior Terresa Delahanty to get her first goal of the season.

This was also Temple’s last game and their senior day. 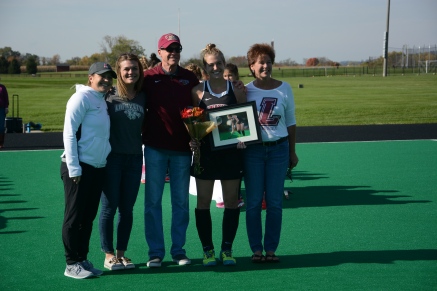 Meg Lillis and her family

Ellen Colbourne and her parents

Rosie Shanks and her parents

Cody Hunsicker and her parents

I can not end without a comment on Saturday’s game. The first half against Holy Cross was disappointing as they jumped out to a 3-0 lead. The team did not give up as the second half was a 1-1 tie. The Leopards out shot the Crusaders 22-10…15-2 in the second half alone. Statistically, with the Crusader’s goalie coming into the game with a 73 percent save percentage probably would indicate 4 or 5 goals for the Leopards. But like much of the second part of the season, converting and finding the back of the cage has been a problem. They had opportunities, there were ill placed shots, and two missed penalty strokes and that bothersome first half.

At no time did I see this team concede defeat. We will miss this fine senior class of five but there is a great experienced group coming back next year. I have always thought this team has talent and maybe it just needed a year to mature.

There is no doubt this team can improve given the talent. There were a number of walking wounded this year, and perhaps there will be attention made to reduce that number next year, to keep us up to the task later in the season. Sore legs and backs can be a problem for women in this sport and perhaps some research on prevention and treatment would improve this area.

The off season will be a time to heal mentally and physically. The league is improving every year and it is not getting easier. I am confident there is a good future coming. In several weeks we will find out who our new players will be. I understand we have five who will sign NLI’s this fall.

I will be there to follow all the events.

One thought on “Leopards Turn It Around For Last Game”