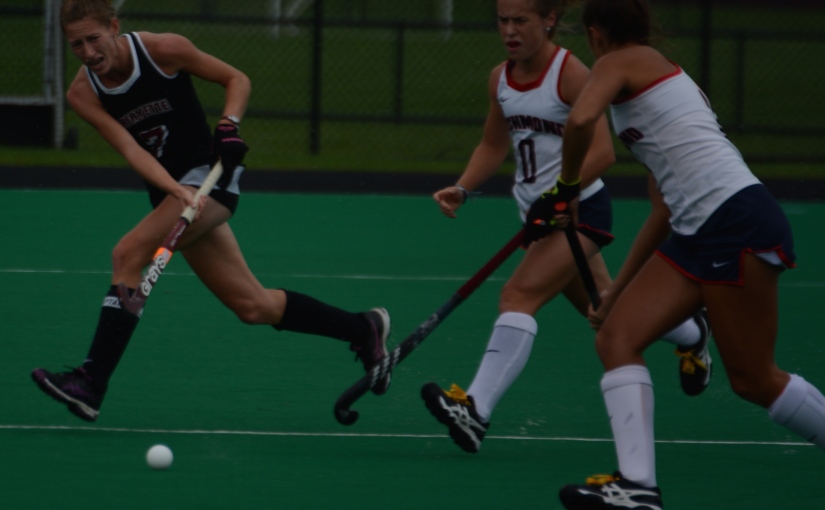 Richmond had built up a 5-1 lead at one point in the second half but these Leopards were not going to lie down and hide. With about 11 minutes to go the Richmond Spiders had built up a lead only the most rabid Leopard fan thought was catchable. At that moment Richmond got a 5 minute yellow card and Coach Stone’s competitive instincts kicked in. She made the tactical decision to pull the Leopard goalie and use the penalty to add a field player to hopefully get some goals.

The Lafayette players responded smartly with two quick goals and raised the hope of the faithful that this game was not over. Unfortunately, it was not to be, but the episode demonstrated to all that this team is never done. They won a must game on Friday night putting them into a position of being in charge of their own fate. They could still make the playoffs and make a run for a Patriot League championship.

One had only to look and the black eye sported by Cody Hunsicker collected in that Friday game to know this team will never go down without expending their last bit of energy. I look forward to the next Patriot League games to see that determination played out.

Although the scorekeeper scored two goals with an assist on each, the goals were indeed a team effort. Lafayette’s first goal scored as unassisted  was in fact started by a Van der- geest shot on a break, that found Shanks to the right side of the goalkeeper who then collected the rebound and directed a reverse chip shot to the upper left.

The second goal started at 60:01 with a corner, and a Van der Geest shot that was saved. The ball was then taken away by Van der Geest who delivered to Sam DiMaio who was at the right post. A mere 29 seconds later Grace Angelella was to find the back of the cage off feed from Ellen Colbourne.

What was remarkable about all three goals was that they came on high percentage shots near the goalkeeper, where the Lafayette attacker could better deliver through the open space. That was a tribute to the teamwork that got the ball and the attacker to be in a spot that would allow for the goal.

We can also laud the defense who in the last 11 minutes held off the Richmond attack with a open net beckoning on the Lafayette side.

Intense competitiveness, teamwork and skill will be what is needed in these final regular season games. I believe these young women of Lafayette see that goal of post season play in their sight and will not fold at this late hour…..no way!!