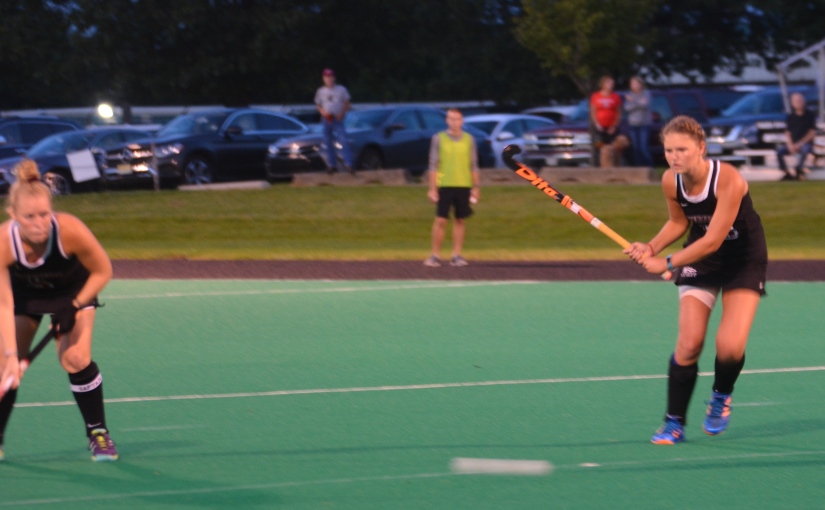 In a hard fought contest that was dominated, for the most part, by competing defenses the Leopards lost to the Big Red from Cornell. It’s been ten years since these two teams met on the turf in the regular season and the 2-0 score was a repeat of that 2007 score. Lafayette opened up strongly, winning 50/50 balls and spending much of the first 15 minutes on Cornell’s side of the field. The statistics for the first half confirm the balance. Cornell had three shots while Lafayette had 2. Corners were even 1-1. Sara Park had two saves to preserve the 0-0 tie at the half.

The second half early going was much the same. However, Cornell’s quick starts on penalties and their ability to spy Lafayette’s passing lanes and jump to intercept the Leopard’s passes eventually led to a possession that resulted in a opening goal. Katie Carlson of Cornell received a pass into the circle, and as Park came out of the goal for the block, Carlson spun around, revealing an open goal to make the score 1-0. Cornell found the back of the cage 9 minutes later  on a hard direct shot of a corner.

The Leopards were not done when late into the second half during scramble in front of the cage it appeared Lafayette had scored, as the near official called a goal. As both teams marched into position to start play again, the officials conferred and the goal was disallowed because a Lafayette player was observed with a foot fault before the shot.

The Leopards were to continue to fight to no avail. Coach Stone decided to pull her goalie  with about 4 minutes to go leaving an additional field player on the field. Lafayette was to manage several shots, one from Sam Di Maio, and one on a corner as time expired. The statistics for the whole game confirmed the even match with Cornell leading on shots 11-8, while the Leopards led on corners 6-4

Sara Park recorded 6 saves while Cornell’s goalie Maddie Henry earned the shutout tonight with 4 saves. In 280 minutes in the cage this year the Cornell sophmore is unscored upon.

Although disappointed with the loss, the Leopards will regroup and face Boston University in a League game on Saturday at 12 noon. There will be lessons learned and game tapes to analyze as a win against Boston will be an important stride in making the league playoffs. This will be Boston’s first league game while Lafayette arrives 1-0 in the League after their win against Colgate last weekend.