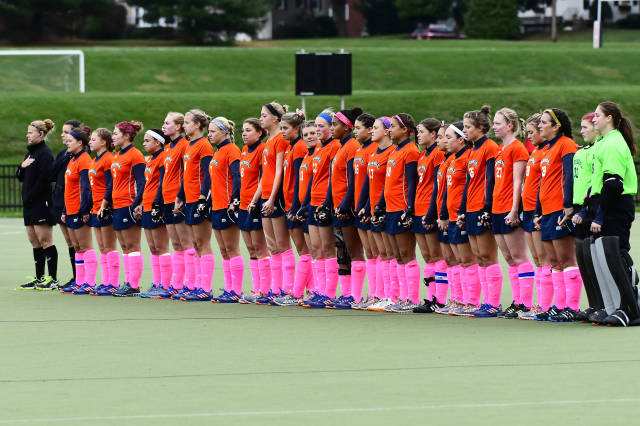 Coach Jeremy Cook returns for his 10th season with a lot experienced players on the field. He lost 5 seniors but has recruited 6 new faces to refill his roster. However, he returns with the core of last year’s team intact. Seniors are always missed but having your top scorers including your goalie back for an encore has got to be considered a plus. Nicole Rupnik, now a junior was tied for second in goals during patriot league games. Emily Finn now the senior goal keeper had a league leading 82 percent save percentage last year. Stephanie Dressler with 41 shots during the regular season and 5 goals was second on the team in offensive stats and is  now part of the strong senior class. Britany Willwerth now a sophomore also returns and was third third leading offensive stat producer.

Overall in the League, Bucknell was third in goals scored  with 10 and second in goals against allowing only 5 goals agains Patriot League foes. They had 90 shots in Patriot play  and led the league in penalty corners with 56.

The Bison play a very competitive out of conference schedule, last year meeting  Princeton, Albany, and Syracuse, playing all but Princeton tough They were even in home games last year but had their closest losses against American, Syracuse, and Boston establishing a strong home defense. They beat Lafayette 3-0 in Lewisburg in a must win game for both sides.

This year looks a little easier in out of conference games however,  as they are playing Penn State at home and Maryland in College Park after a game in DC with American. They will also meet perennial power Syracuse in Syracuse on September 2. Eight of their 18 games will be at home. There is a sampling of Ivy League teams with Cornell, and Yale on the schedule as away games.

Goals for this year will include increasing their scoring, and maintaining their strong defensive posture, which all seems in reach. Bucknell traveled to the Netherlands this spring which has given them extra practice time and should be beneficial  to get them off to a strong start.

Bucknell and Lafayette will meet on Friday the 13th in October at 7 pm under the lights. Both teams always seem to meet in crucial games, this will be no exception.

Meanwhile Amanda Magadan, who graduated from Lafayette last June makes a start for the US Team against India in South Africa yesterday.