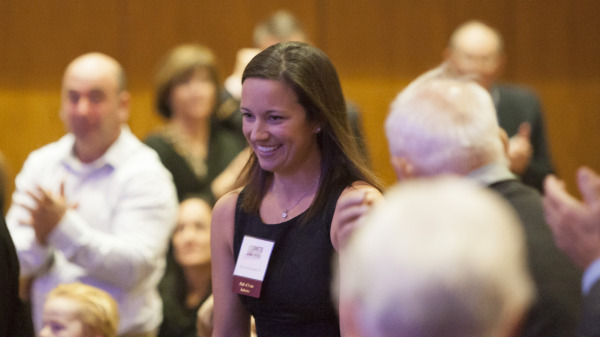 Lafayette/Lehigh weekend is always special because of the great football rivalry, but it is a week of events that captures the moment for alumni and students alike. One event that is always well attended occurs on the eve of  the game at the annual Hall of Fame dinner. There are major honors that are announced, and Lafayette Field Hockey athletes were   recipients of two special award. First there is the annual induction of new members to the Maroon Club Hall of Fame. This year Megan Monahan Kahanowitz ’03, was the newest selection to the Hall of Fame.

Megan was joined by her husband, family, friends, and teammates as her accomplishments were read to the assembled diners. Kahanowitz was a Division one Second Team All-American in her senior season in which she led the nation in goals (33) and points (72).  In her final two seasons she was a Mideast Regional All-American first team selectee and was twice named Patriot League Offensive Player of the Year as well as tournament MVP.

She was a three time All Patriot League First Team selection and led a team that had a school and conference record 19 consecutive wins. Megan was the winner of the Charles L. Albert Award, as well received recognition from the LVAIAW, ECAC, and NFHCA all academic team. She also played in the North South All Star Game. Monahan still holds the Patriot League and Lafayette record for goals in a season, points in a season and ranks first in career points (160) and ninth in career assists (30).

Senior Katelyn Arnold received the Maroon Club scholar athlete award. She was an all Patriot League selection her junior year and during her career collected 18 wins and 204 saves. She played in the NHFCA senior game during championship weekend at ODU on the saturday between the semi finals on friday and finals on sunday. She is a member of the NFHCA all academic team and a Scholar of Distinction. She is a government and law major and a economics major. She hold a 3.94 GPA.

Finally, on sunday, the University of Delaware ( a regular Lafayette opponent), won the national championship against University of North Carolina. Congratulations to the Blue Hens. It is a testament to the growing balance in US College Division One Field Hockey.