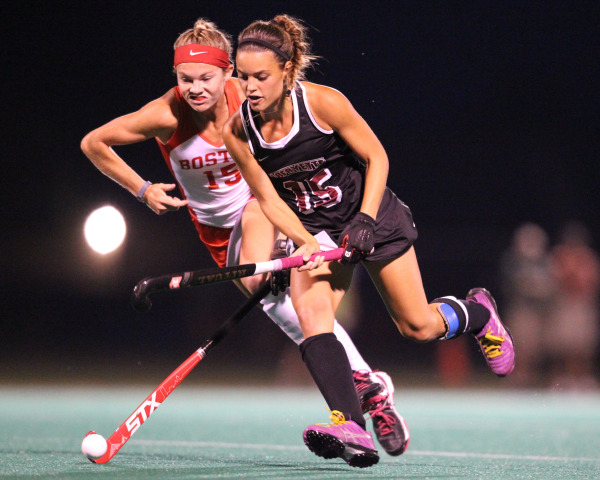 This saturday, Lafayette will play another homecoming game with a Patriot League rival, Holy Cross. The Leopards will arrive with a 7-3 record and will defend a 2-0 league record. Holy Cross has a 5-5 record with a 1-2 league record. So why be wary? This is a team that has been improving under Head Coach Lindsay Jackson. Last year, against the Leopards they  had a remarkable come from behind victory (aided by an unusual 10 minute yellow card against Lafayette), and this year, they are just as tough in the second half coming from behind in several games and winning several overtime games. Holy Cross didn’t quite make the playoffs last year, missing on a tie breaker with Lafayette and Bucknell. This game could be decided on emotion as well as skill. The two teams have one common opponent in the conference, Colgate, who Holy Cross beat in overtime, after knotting the score late in the second period. In out of conference games, there is another common opponent, Fairfield which Holy Cross beat 4-3 in overtime while the Leopards beat Fairfield 3-2 in the first game of the season.

Holy Cross is led by Maureen Conolly who is leading the league in shots and goals. However,  Emily Loprete scored two goals in the Colgate game. In last sunday’s contest Temple won, scoring two goals in the second half to defeat the Crusader’s two to nil. Holy Cross’ two league losses came at the hands of American and Lehigh.

The statistics may reveal more. Offensive production is similar, in that Lafayette has scored 1.9 goals per game vs. Holy Cross’ 1.8. But in goals against, the Leopards have only let in 1.9 while the Crusaders have let in 2.6. Lafayette has the stronger schedule with field hockey corner ranking Holy Cross  SOS next to last in division one.

However, Lafayette should not take them lightly, a loss for the Crusaders would put Holy Cross in a very difficult position, with 3 losses and Boston and Bucknell left to play in the league. A win by the Leopards would put them in great position to make at the playoffs , but  also sets up a showdown with American next week, and an ability to make a statement on where the playoffs will be.

So the bottom line for the Leopards is play good defense, watch out for Loprete and Conolly, take advantage of scoring opportunities, and carry that winning attitude for the whole game because this team will not go to sleep in the second half.

Unfortunately, again there will be no video for the game.