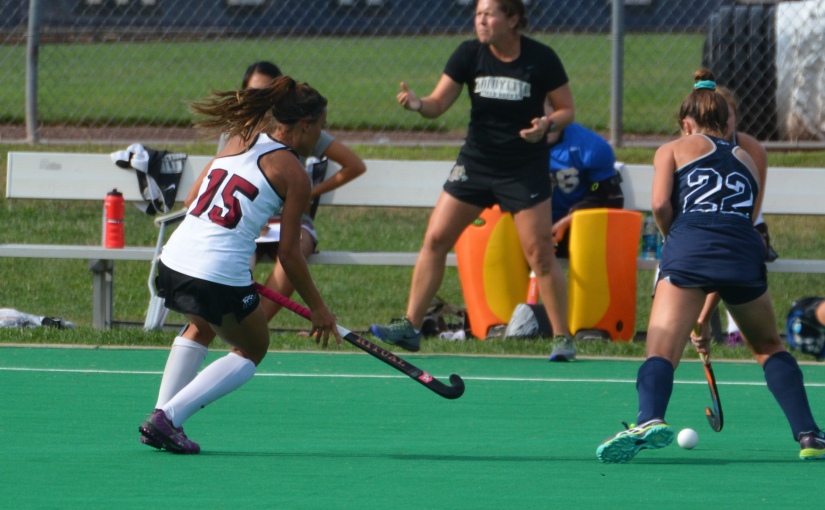 So Lafayette gets 11 shots to Monmouth’s 8, 15 penalty corners to Monmouth’s 3 and you would be hard pressed to say that Lafayette didn’t win this game. However, 5 of those penalty corners failed on the stop with no shot taken. Lafayette had a hard time adjusting to the harder, faster Monmouth turf and Monmouth took every advantage of the home field. Mallory Kusakavitch opened the scoring for Monmouth at 28:27 off a feed from Bachop Garden forcing a one on one with the Lafayette goalie Kaitlyn Arnold. At 32:45 leading scorer Alyssa Ercolino received a half field pass from Julie Laszio deflecting the ball into the cage.

In the second half Lafayette was to step it up with 11 second half corners and 8 shots. Unhappily for the Leopards, aside from two goals called back, the ball was just not going to pass the goal line. The Hawk’s goalie was very sharp in the goal and Monmouth played with aggression and high energy. They often had Amanda Magadan, double and triple teamed and double teamed our forwards in the circle.

The Leopards were to surrender a last goal in the second period at 53:45 as the result of a penalty stroke called near the right forward edge of the circle. It was one of those mystery calls that neither side could explain. Lafayette continued to get opportunities but between the Monmouth defense and the inability to adjust to the faster, harder surface, the Leopards remained stymied. Coach Stone added all eight field subs into the game while Monmouth only used 2 from their bench.

Captain Amanda Magadan said the team would shake this off and will return to the friendly environs of Metzger Field with enthusiasm, as they meet Longwood University on Sunday at 12 noon.