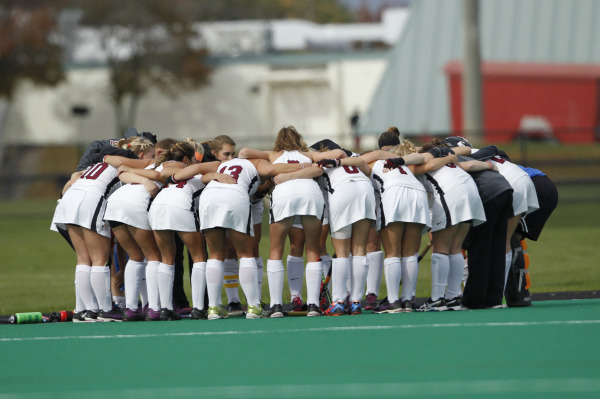 The Lafayette Field Hockey team will be traveling an estimated 23,000 combined miles in the next four days to arrive in Easton to begin preseason practice for the 2016 season. Between August 9th and August 26th the team will engage in about 14 days of multiple practices relieved by two live scrimmages with Rutgers and Columbia. The first real game will be against Fairfield University on August 26th. Fairfield is a former Patriot League member who won their own league last year, only to lose to Patriot League champion, Boston University in the first NCAA game.

Every team in the league will  begin their own journey, each with their own goals and objectives to try to perform better than in 2015 regardless of their final record. The league will see one new coach. Lehigh has hired Caitlin Dallmeyer who comes from Dickinson College and played her hockey at Duke. Holy Cross has hired a new assistant who was an assistant at Bucknell, and Lafayette has a new assistant in Sara Dalrymple from Hofstra.

The league itself will be stronger and the schedules of last year’s top four teams  are sprinkled with NCAA tournament participants as well other  highly ranked teams. It should raise the RPI of the whole league. Holy Cross which just missed getting into Patriot League tournament will be looking to break that ceiling this year while American, Boston University, Lafayette and Bucknell will be trying to keep hold of the top four spots in the League. Although Boston University only took in two recruits this year, they will return 18 experienced players and will be a team to beat in the League. However, they have lost Sofi Laurito, their best player. American University returns with Patriot League rookie of the year Rafaelo Rubas. They will have 19 returning players and will play one of the toughest out of conference schedules in the league. Lafayette  brings 14 players back led by team captains, Kaitlyn Arnold who led the league in shutouts, and first team all patriot leaguer and U-21 team member Amanda Magadan. Senior Aliza Furneaux will anchor the defense while Ami Turner, who was the second leading scorer on the team will start in the midfield. The roster is boosted by the largest freshman class in the league.

Bucknell will be very solid as 19 return from the team that went two overtimes against Boston in the PL tournament. Lehigh’s new coach will rebuild as she  concentrates on improving the Mountain Hawks team culture. Holy Cross had some interesting wins last year including a 4-3 win against Lafayette. Seventeen will return from last year. Colgate’s disappointing season is behind them as they rededicate themselves for 2016.

My guess is when Head Coaches and Sports Information personnel cast their preseason ballots it will sort out in descending order, American, Boston,Lafayette,Bucknell, Holy Cross, Lehigh, and Colgate. I will reserve my predictions until after preseason. ( Hint: I think Lafayette and Bucknell will surprise!!!)

In the meantime, our Leopards return after hopefully, intense preparation. Many have been playing in home club teams, and keeping sharp in preparation for tuesday’s arrival. The operative word for the next several weeks is integration and team building. The key will be how quickly the new players can be integrated into the team allowing Coach Stone to install a seamless offensive and defensive scheme. No doubt there is talent in the returning veterans and new players,  but the most important job will be to jell into an effective team. Our first clue will come in New Brunswick at Rutgers.

Next up, will be arrival day and the opening tailgate!