For many college field hockey fans we are entering the vast empty space of the summer doldrums, but ironically this is the period where champions get made or fail. In the coming weeks, there will be final exams, graduations and all that entails for young people at this time in their lives. However,  there will also come the preparation for the coming season. They will soon receive training packets from the coach. Diligence to that sort of preparation is not only for them but a responsibility to their teammates. There will be only two weeks of extensive training starting August 11th and an exhibition game with Rutgers University six days after reporting  on August the 17th.

For our first year student athletes there will be additional readings and class selections as well for their first academic semester as a college student. Yes, the summer is time to decompress a little but the next chapter can creep up with increasing speed. It is an exciting time filled with anticipation,trepidation and preparation. Each new team member will have already received contacts from the current team. Many current team members will remain in the area and captains practices will be scheduled. It would not surprise me to hear that many will arrive at Lafayette earlier than the 11th to practice and bond on their on.

Having gone through this as a student ( eons ago) and a parent ( a little less than eons  ago) it is like turning a page and a different mindset is required especially for our first years. For the veteran teammates also,it will mark a period where they will take on new roles as leaders. For coaches there is preparation as well. College sports demands a 24/7 perspective, preparing for current contests, near future contests and recruiting for the following year. It is my understanding Jennifer has already received some interesting commitments for 2017.

For the team that reports for preseason, there will be several new changes, there will be new uniforms, new plays and strategies to learn, and an additional assistant coach. Hopefully, the team will have already been practicing together without coaches, attending and even instructing young players at camps and clubs. There will be high performance organizations, and for Amanda Magadan several international competitions with the US Team.( The first will be a game with Chile at the “Nook” on May the 20th). 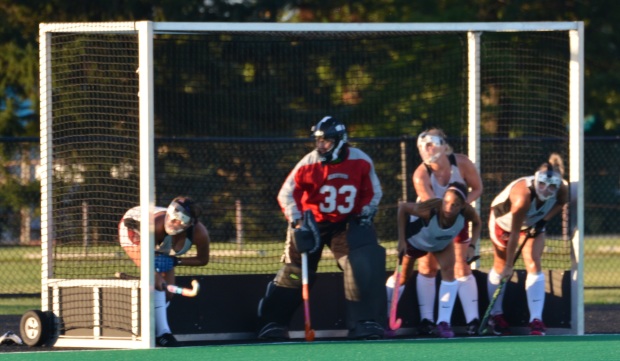 Also congratulations to several members of the team on their academic successes, Katelyn Arnold our excellent rising senior goalie was elected to Phi Beta Kappa, a national honor society for the best scholars in US colleges and universities, and Aliza Furneaux , our rising senior defender and chemical engineering major who has received a prestigious internship with the EPA this summer based on her academic work. There will be many as well who will make Dean’s list. When their final grades are posted, I will post them here when it is made known.

So perhaps the summer doldrums are not so dull after all!!