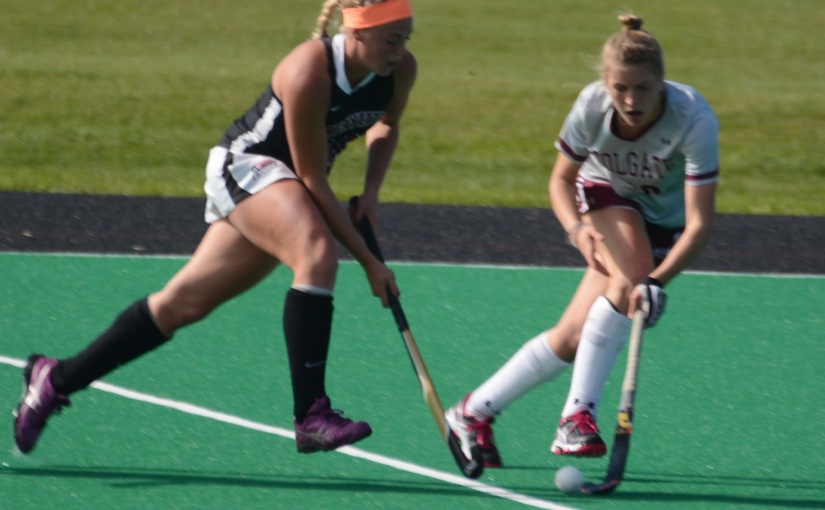 With only 27 seconds having run off the clock sophomore midfielder Ellen Colbourne sprinted down the sideline and headed to the circle. She took focus at the prize. Reversing her stick she launched a high shot reminiscent of a missile, as it streamed over the head of the Colgate goalie into the back of the cage. The Leopards were to follow that, during the 70 minute game with 19 more shots, a season high, but were stymied by 12 saves from the Colgate goalie, Maria Krull. The Leopards themselves came up with an outstanding defensive effort,  and Katelyn Arnold was to make key saves giving  her the third shutout of her career. After the game, Colbourne described her feelings scoring her first goal of season, and how excited she was to do it in front of her family, who had traveled all the way from Vancouver to witness her heroics

The game was typical of a Colgate/Lafayette struggle. Three years ago in the playoffs the Leopards had to get beyond the Colgate Raiders to reach the Championship game in an overtime struggle that ended in a 4-3 victory. That season ended with rings for everyone, when the foliowing day the Leopards played a second overtime game to win the championship. Last season Colgate put the hammer to Lafayette’s hopes for a championship in a one-nil game where Lafayette was to have over twenty shots to only low single digit shots for Colgate. Lafayette lost 1-0. The team was looking forward to this chance to avenge that loss but, it was to take a stout defense from the team and Katelyn Arnold’s key saves to bring home the win. The game ended with two Colgate corners with no time on the clock. The team was able to turn them away and preserve the victory.

The win put Lafayette into the Patriot League playoffs as a third seed. All week, fans were using the best of their math and logic skills to envision a path to Boston and a chance for a championship. Lehigh was to make the calculations easy as they defeated Holy Cross 2-1 in a game that started one hour before Lafayette’s game. This left Holy Cross 2-3 in the league and on the bad side of tie breakers. In the end, the Leopards were to put talk of tie breakers aside as the Holy Cross defeat got the Leopards the last place on won/loss record alone,  ending their regular season league campaign at 3-3 and firmly getting their ticket punched for a playoff spot. As they were tied with Bucknell, a Buckell loss to American during the afternoon moved Lafayette to the third seed on the basis of a head to head win against Bucknell earlier in the season. So the season has not ended for our heroes, and a trip to Boston to meet the American Eagles in an afternoon contest on friday for the Patriot League semi-finals is in the offing.

The team was not to learn of their fate until after the game when Coach Stone announced it. Hugs and cheers were the result. The regular season is not over as Lafayette is to play Yale in a non-conference finale this afternoon. It is also senior day, as the six seniors cap their careers with their last home appearance in a Lafayette uniform. I usually highlight the careers of the seniors at this point, but since there is still hockey to be played I will leave that until after the final game is played.