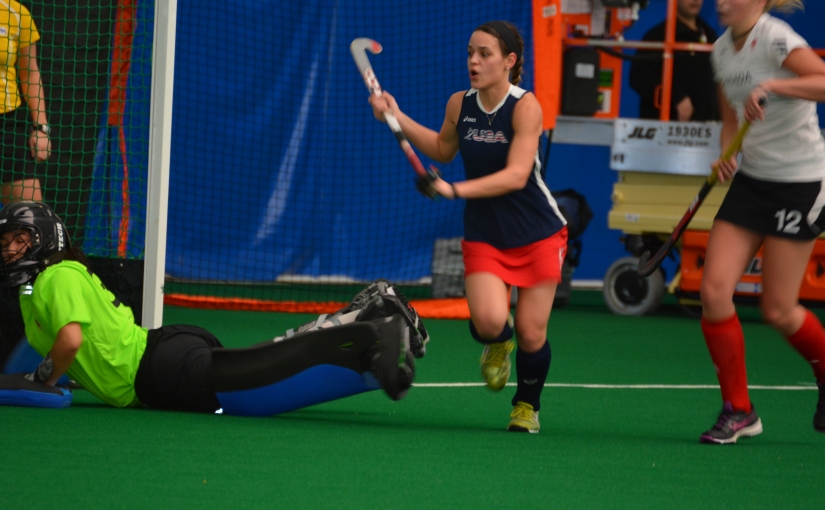 Fresh off her experiences with the Lafayette team in Spain, junior Amanda Magadan continued her intensive field hockey play by being invited to the Young Women’s National Championship, at the US training center at Spooky Nook in Lancaster,Pa. This is part of the selection process for the US teams for the coming year and beyond. Amanda has already played one year on the US under 21 team and she is hoping to continue on with the team and play in the Junior Pan Am games in the spring of 2016.

All of the selectees were randomly assigned to one of eight teams. For the most part, these groups of strangers needed to figure out how to find success in game play over the course of the one week tournament. Amanda’s team USA Gold was assigned two coaches, Jarred Martin ( associate coach at Duke University) and Grant Fulton ( asst. coach at the University of North Carolina). Both coaches have extensive international experience and the team was led by the coaches who were, “hilarious, smart, and helpful,” according to Magadan.  She continued,” Our team, USA Gold really grew over the week. We improved each game and really bonded.” The chemistry seems to have been there as they were undefeated in pool play during the week.

The team learned to win going away and won the close games as they recorded goals of 4-1 in the first game, 1-0 in the second game and 2-1 in the third game. Amanda was active in the games as she recorded 1 goal and 1 assist. Many of the team’s goals were the result of their attack penalty corners. Their team managed to go to the championship but lost 2-4. Demonstrating her completive spirit Amanda added,” Although the week would have been a little sweeter ending with a win , our team had lots of fun on and off the field and I genuinely enjoyed my coaches and teammates.

But the object of the tournament was to select players for the under 21 team and Amanda was again selected to Junior National Camp this tuesday June 30 through Friday July 3. It is there where the final selections will be made. Individually, Amanda has seen great strides in her play and hockey intelligence from being a part of the process, which she is grateful for. She will work hard and is aiming to get better. Ultimately all this work is preparing her for the season at Lafayette. She is looking forward to being with her fellow Leopards soon to begin final preparations for a successful fall in a maroon and white uniform.

This fan can’t wait for preseason as the whole team returns in August.