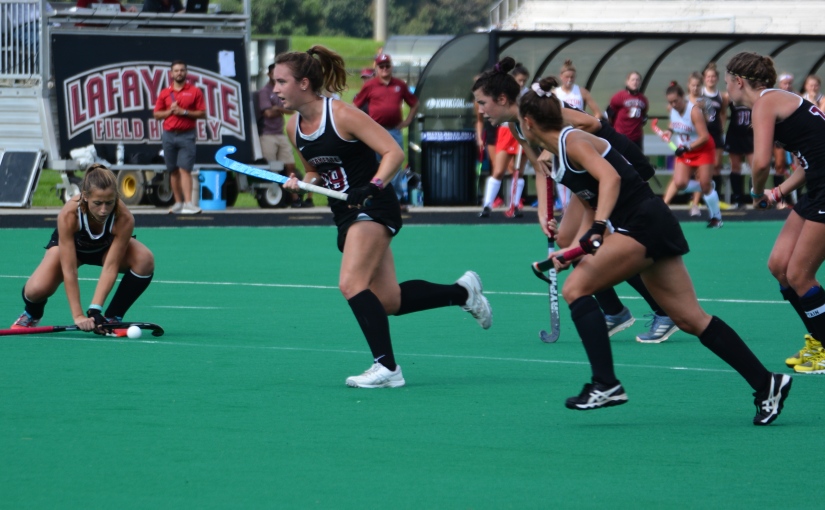 March 29, 2019 will mark the debut of the 2019 Leopard Field Hockey Squad. Our young women have been hard at work, through the cold of winter and early morning training sessions preparing for the ultimate fall challenges. First year rookies are no longer rookies, Sophomores progress to upperclassmen, and Juniors become the leaders. From my observation, no one has lost a step, in fact I could see improvement in this squad who made the playoffs, and are ready to stride to greater heights.

Yes indeed, it was a practice game but I could see enthusiasm and confidence in this group. Playing under the new rules ( 4 fifteen minute quarters and a stopped clock on corners) I have to say the game tempo was picked up and gave these young athletes a chance to go 100 percent for the 60 minutes. From a fan’s standpoint this is an improvement.

The coaching staff, nevertheless, were able to substitute and experiment with athletes in different position and new roles. I was impressed with Audrey Sawers play in a more forward position. She showed excellent skills and was a real threat participating in both goals during the practice game against a.good Monmouth squad. Molly McAndrews has lost none of her flair, and in one shoot out stunned the fans with her dodges. Lisa van der Geest was the clear leader on the field directing play.

This was a first good contest, as Monmouth showed a lot of the skill that earned their conference championship last season. They showed ability to press effectively and their shooting and passing skills was on par with higher echelon teams, They should do well in the American East this fall.

It was a little difficult to identify players since they wore numberless jerseys but it did not detract from the entertaining evening. I still believe this team will get better as the spring advances and we can sample a peek of their determination in games with Virginia and Maryland in the near future. There is still a lot of work to be done but I firmly believe the Leopards will be in the hunt for more than just an appearance in the Patriot League playoffs!

Next week it’ll be off to the University of Pennsylania for a tournament on April the 6th against Penn, Virginia and Rider. to start at 11:30.

PS. I was impressed with the new fencing at Metzgar. It finally makes the complex more like the rest of the campus. I know this has been a project that has been desired for almost a decade.