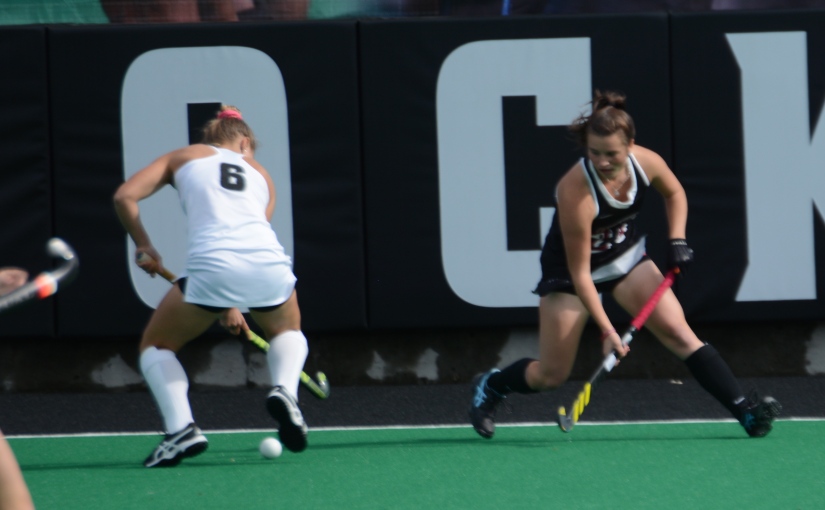 Grace Angelella used a strong reverse stick assist to give Sam DiMaio the winning shot in the Leopards  2-1 double overtime win against a game Cornell squad. Cornell opened the scoring in the first half with a shot that hit the backboards with only 25 seconds left in the first half. Trailing by 1 goal the Leopards redoubled their efforts in the second half. Lafayette dominated the statistics but were unable to solve Cornell’s zone and strong circle defense. Using a persistent attack from the right sideline ,Lafayette was to get close to the circle but were unable to find the combination that would get around the Big Red’s circle defense. In the end, the Leopards were to have 17 shots to Cornell’s 7. Lafayette’s 12 shots on goal were turned away 10 times by the alert Cornell goal tender.

Rachel Bird was to score at 53:17 during one of Lafayette 8 corners, using a Van der Geest assist. Cornell had no corners at all. The Leopards were to use the right sideline all game long to move the ball forward but were unable to turn  circle opportunities into goals. It was a long bus ride to Ithaca, and it is understandable there might be an emotional let down after Saturday’s game against American University. Three Lafayette players saw 89 minutes on the field only one being the goalie Sarah Park. There were three bench players seeing action. Cornell was equally miserly in bench minutes with two of their players aside from the goalie seeing 89 minutes. They used 4 bench players on the afternoon.

Lafayette is now 8-9 with one game remaining against Bucknell. A win will not only lock up second place but could technically tie BU for first place with a BU loss to Holy Cross. A tie breaker would still  give BU the home field. A win in Lewisburg will give the Leopards a .500 regular season. They will travel Friday for the 2 pm Saturday start.