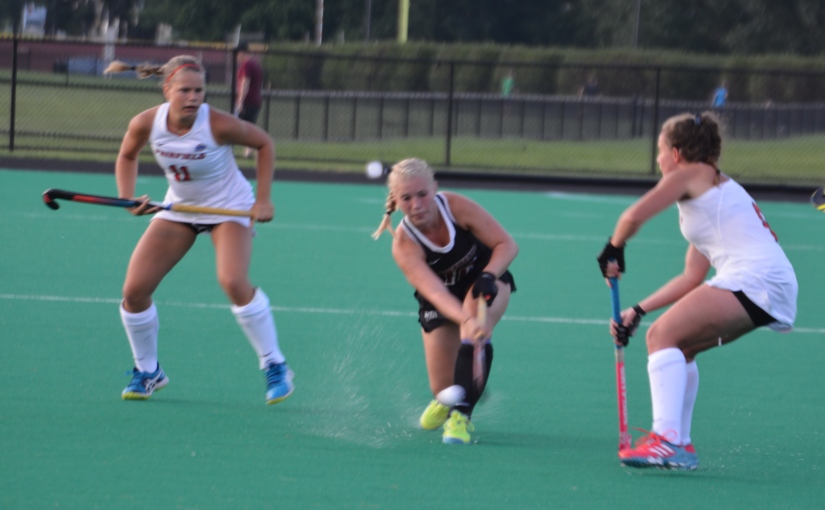 Before a crowd of 612, one of the largest ever to watch a field hockey game at Rappolt Field, the Leopards suffered a rare opening day loss to the Stags of Fairfield University. The last opening day loss was September of 2013 against then nationally ranked Iowa University 3-0. Lafayette had beaten the Stags last year 4-0 but 26 year head coach Jackie Kane brought what everyone agreed was a reconstituted squad to meet the Leopards. The Stags had lost 2/3 of their scoring to graduation but Fairfield managed to score using three different players to find the back of the cage.

Leopard Caroline Turnbull was the first to score with a perfect unassisted strike at 18:39 into game which followed a offensive series that saw Grace Angelella barely miss the cage on a shot of her own seconds before. But Fairfield quickly followed with a goal of their own 45 seconds later from senior Kaley McMullen off a rebound assisted by fellow classmate Corrina Perichetti. But it was graduate student Iona Armour who was to put the Stags ahead for keeps at 32:22 with goal that left the score at the half 2-1.

In the first half the Leopards had 3 shots to the Stags 6 but possessed the only corner of the game. Although both teams played cautiously in the  beginning it was the Leopards who maintained a ball control offense with the offense finding themselves in a virtual 7 v11 situation near the goal as Fairfield was able to organize faster than Lafayette.

The second half saw the Leopards penetrate the circle more using long penetrating passes from All Patriot League center back Lisa Van der Geest but were unable to get around  Fairfield in their circle defense. In the second half, Lafayette. was to get off 10 shots to Farifield’s 6 ( mostly during a period in which the goalie was pulled by Lafayette with 8 minutes to go). In addition the Leopards out cornered the Stags 5 to 4 in the half. During this part of the period the Leopard were fighting a 3-1 deficit after a sophomore Danielle Profita goal off a rebound at 59:34. ( Her former teammates from Warren Hills High School were in attendance).

The Leopards were missing two players who played significant roles in last years game in Connecticut, Sophie Carr is still recovering and rehabbing from knee surgery and Co-Captain Theresa Delahanty was sidelined with a fractured thumb but is expected to return in the coming weeks.

I believe in our athletes. These are good field hockey players and it is in their capacity to turn this around. On to Richmond, Friday @ 3pm….Go Pards

It was a mixed bag for the Patriot League as Holy Cross was throttled by the Bears of Maine 9-1. Lehigh lost to Lock Haven 1-0, Colgate won over CMU 1-0, American beat Richmond and Boston beat Northeastern. Bucknell lost to Longwood 2-1.