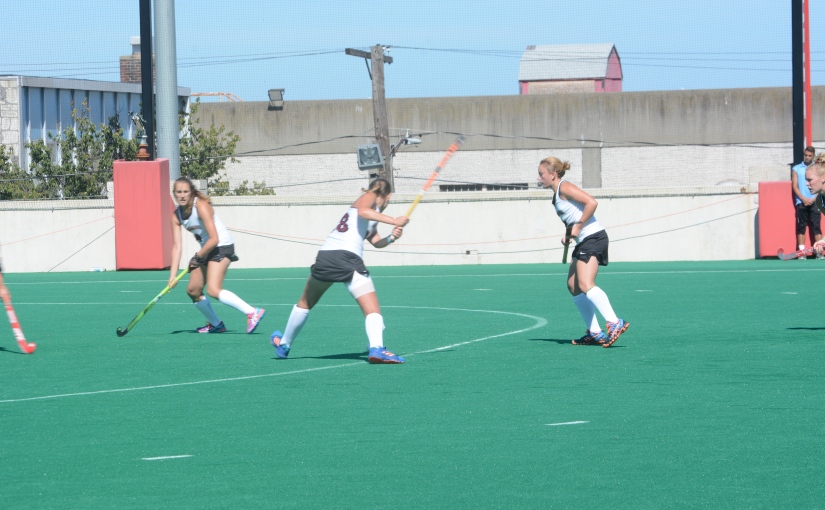 Last week Boston University’s Head Coach Sally Starr, after the 8-1 thumping they received at the hands of Connecticut, announced they were going to use the recording of the loss as a teaching tool. She stated they were going to view it again and again and use it to correct every mistake and weakness they saw. Mission accomplished, as they used the week’s preparation, and came out performing without many flaws , using their 9 shots to Lafayette’s 4 and their 5 corners to Lafayette’s 3 to take advantage of every breakdown in the Leopard’s play and turn it into a scoring opportunity

Play was fairly even until 20:17 left in the first half, as the Terriers used a breakdown in coverage to score a goal, making in 1-0. Over the next 7 minutes the red team scored two more goals, one after a Lafayette defender found herself on the ground, and a second that just bounced over the Lafayette defender and goalie into the cage. But all was not lost, as Ellen Colbourne used her great speed intercepting a ball, and going one on one with the Terrier keeper, zipping it past her to make it 3-1 a the half.

The Lafayette faithful were looking forward to the second half for more of the same action from Colbourne. They did get some of that with Sophie Carr, using her defensive skills  stole the ball at mid-field and headed for the Boston goal untouched. The Boston goalie came out to meet her, as Ellen Colbourne showed up at the circle. Carr passed the ball to Colbourne just as the goalie made her guess,  and Colbourne’s shot got blocked.

Anyway, Boston was determined and prepared, and will walk back to their dorms with the 5-1 victory  under their belt. Lafayette will move on to Harvard tomorrow, who won in overtime against Yale 2-1 today,  and Princeton comes to town to play the Terriers after defeating Dartmouth.

As to the game film, like Boston using their UCONN film to advantage, perhaps the Leopards can improve on their play to correct their errors made today. Harvard will be the 4th ranked team they play this year and next week will be their 5th, defending national champion Delaware.

Lafayette was not the only team to watch this weekend in Boston. My 10 year old grand daughter played in  her first field hockey game… ever. Her team Newton Country Day School of the Sacred Heart defeated their arch-rival Dana Hall 2-0. The ten year olds acquitted themselves well and Ellie my  grand daughter was seen playing a firm defense and moved the ball well at attack!!