The Albany Danes used only two substitutes as they depended on two first period goals and a third goal in the final period to prevail in a game with the Lafayette Leopards. Before a crowd of over 500 fans ( the largest of the season), the Leopards battled, hoping to outlast a skilled Dane attack and perhaps the best player in country Paula Heuser from Monchengladback, Germany. Heuser put on a clinic on the drag flick as she scored two goals, one in each period to lead the Danes in a three to one hard fought contest.

The Leopards had hoped to use their defense to stop the Dane offense for most of the game, to allow the deep bench of the Leopards to gain an advantage in the second period. It did work to an extent, as the Leopards were to use 6 players from their bench to get 4 of their five shots in the second half, only to be countered with five shots by Albany. The whole game saw Albany get a total 8 shots to the Leopards 5. The difference perhaps was the ability of Albany to get 8 corners to Lafayette being shut out with the officials not seeing a penalty inside the circle against Albany all game.

Ami Turner was to provide some excitement for Leopard fans, with about seven minutes to go by diving for the ball late in the game in the middle of the circle.  Seeing an Albany player out of position she was able to flick the ball over a Dane defender’s head and into the cage to close the deficit to  two.

Lafayette’s center back was injured after receiving a blow to the head from a stick, after a shot. The official needed to stop  play as Hannah Millen was helped off the field with no penalty called. Hannah was not to be held out for many minutes of her senior season and returned to the game about five minutes later. Despite the after game ice pack I have no doubt the plucky center back will be in the lineup on Monday against Drexel.

It has been a dreary three games as the Leopards have endured the toughest part of their schedule, but not their most important part. Lessons learned in the last week will no doubt be applied against a 1-5 Drexel squad and an all important league game against arch rival Lehigh next Saturday at Lehigh. Fans will be looking for some of that  offensive cohesiveness that carried them to their 5 wins earlier. The season is now half over and a winning sprint I believe could be in offing. 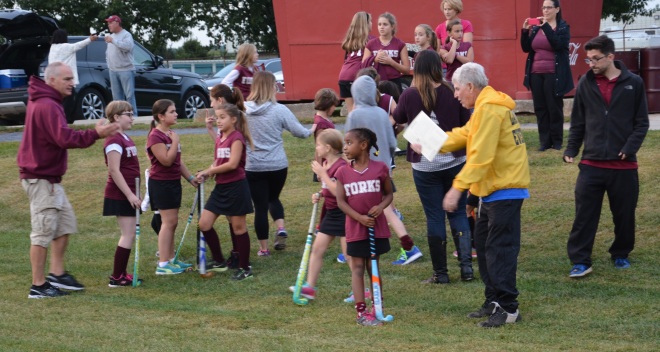 The crowd was sprinkled with a fair number of fans from youth field hockey leagues from Forks Township, who put on a display of skills at halftime for an appreciative crowd.

The next game is at Drexel at 7pm on Monday.