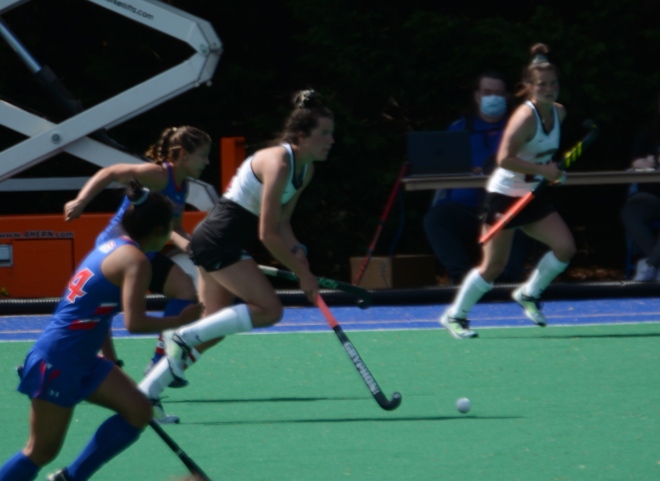 The Lafayette Field Hockey Team played a magnificent game, but for the second time this season lost in double overtime. If they had won they would have claimed the last slot in the PL championships with 8 points. Holy Cross will get the coveted fourth seed with 7 points.

Jennifer Stone had the team well prepared and they played their hearts out. She had only two field substitutes ( mainly due to aLafayette ill advised covid rule which led to four freshman not being able to play or even been in residence). Each player today stepped up, and had the Eagles stymied at the end of 4 quarters and 1 1/2 overtime. periods. This was a game that is a tribute to the players and Lafayette coaches both

But with minutes left during a corner by American, the umpire committed the unforgivable sin of making a call that may have sealed the Eagle win. I am going to say this so there is no mistake, there was no foul that demanded a stroke. In addition, I have not spoken with any coach or player and the opinion is truly my own and represents only my view as expressed in this independent blog.

Here is a second picture picture the moment the official calls for the stroke. Note, the goaltender is in position, there is another defender near her and if it was a shot the American attacker was at a poor angle . In addition, Audrey is not making an intentional move to foul, she is in a reasonable field hockey position to make a play.

I  ran the video five times when I got home. The call was made on Sawers who came out to meet the offensive player during a corner, who was passing to someone on the end line. It  was NOT A SHOT!! The rule is that a stroke is called if the penalty was the result of stopping a sure goal. This call was not even that close or the foul was intentional inside the circle. The reason for a stroke would be an intentional foul inside the circle. Again clearly not occurring

I don’t know how the game would have ended, but to have an obvious offical’s error determine the outcome is wrong. Ironically, yesterday’s soccer game for the PL championship was influenced by a red card during championship, against the undefeated Leopards playing American. Deja Vu!!

I could rail against the officiating, but I don’t see much point, everyone agrees the officiating in field hockey needs improvement. However, I am going repeat my plea to the League, we need to have video replay. All the views I have shown would have been available for video replay. Every major conference has it, and all NCAA tournament games are played with it!!  Patriot League football has it….Patriot League basketball has it…it’s time. The costs are minor and I will make the calls and raise the money myself if necessary. It is my belief with video review eventually the officiating  will get better as well!!

And now the rest of the story

It was obvious from the get go that this was to be an intense game. American was playing for the home field, Lafayette was playing to get into the tournament. But 5:10 into the game the ever dangerous Noor Coenen found the back of the cage off a rebound of a blocked shot. However, with less than 20 seconds left in the opening quarter Lafayette senior Grace Angelella evened it up assisted by Lafayette’s Audrey Sawers. It only took 3:42 into the second quarter for American, and Aidan Rossman to again deliver off a rebound putting American ahead.

With American ahead 2-1 Coach Stone and her assistants had the team ready to respond when Audrey Sawers, who was all over the field making play after play got an assist from Sophie Carr and Anna Steps during a corner delivering the ball to back of the cage evening the score up.

Next year may see several “seniors” return for a rubber last season. American it appears will return two including Noor Coenen. Lenke Haavas from Lehigh is rumored to return and there are several other teams contemplating returning stars to beef up their teams. It could be an exciting fall!!

2 thoughts on “Deja Vu All Over Again”