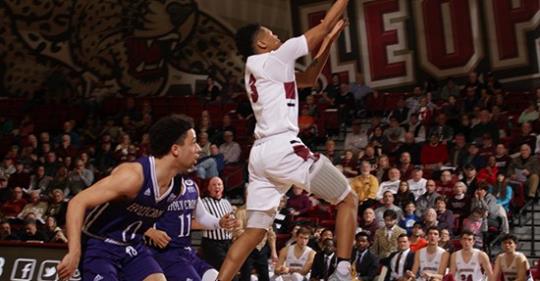 For the first time this year the 2019 field hockey Leopards were together in one place. New recruits joined the current team at a basketball game and the basketball team responded with a hard earned 69-67 win. The game was nationally broadcast on CBSSN as well.

Practice has started for the field hockey team and already our young women are looking forward to the late March and April spring games. Most that had injuries last season looked fit, there is still some rehabilitation to be done and one surgery was recently performed on Kara Tiedtke who hopes to return by the fall season. There is still a chance we may see more recruits before we close out the roster this June.

The team was into the whole game and during half time Hailey Abbott, one of our goaltenders, was picked for the $1,000 half court shot!  Let’s just say it doesn’t look like Hailey has a future as long shot basketball player!! Great effort though!!

The weather has been kind to the team as they have been able to get on the field already but, as Northeast weather tends to be, snow from last night is covering the ground again as I write this.

Spring is only 5 weeks away, meanwhile its time to get out my tractor to plow away some winter from my driveway.