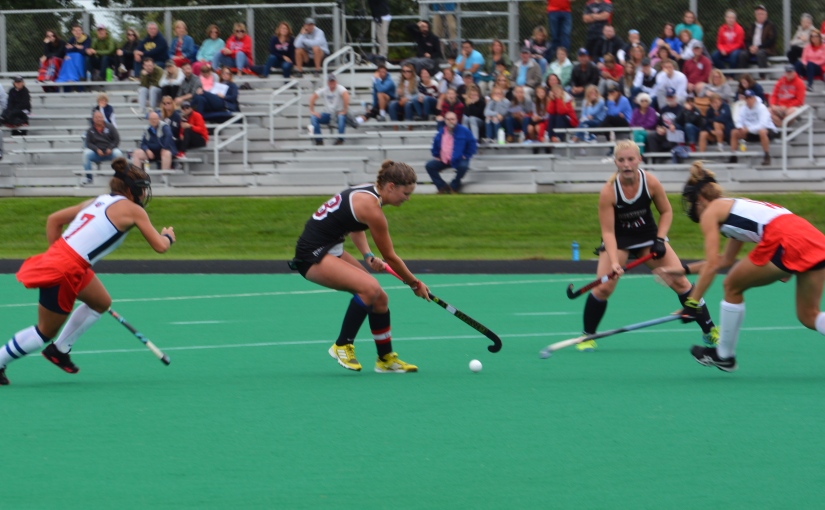 No one can criticize the Lafayette Field Hockey Team for ducking the. tough ones as Lafayette left the field having lost to it’s fourth nationally ranked opponent this year. It was all hands on deck as Lafayette kept pace with the Flames from Liberty all afternoon. One could see from the stands the progress made with the speed and intensity demonstrated in a high level Division one game.

The game started ominously as Liberty scored with only1;35 having run off the clock as Agueda Moroni, the second leading scorer in the nation nailed a shot during a corner after a Mallory Fotenback insertion and a Kendra Jones pass. Moroni found a spot low and to left giving Liberty the early 1-0 lead.

Maroni was to get off 11 shots, 7 on goal and connecting for all three Liberty scores. But that was not the only story. Lafayette kept pace for the rest of game although they were unable to stop Maroni. Park had a good afternoon making 12 stops while Rachel Bird and   Adriana Pero had two defensive saves.

During the second period after Liberty had established their 2-0 first period lead they were only to manage one more goal as Maroni found the right side of the cage. Lafayette was to answer on the last play of the game with a Van der Geest rocket during a corner assisted by Jenn DeLongis and Theresa Delahanty.

Lafayette got off 13 shots during the game. They did outcorner the Flames 9-4.

Sara Park had an 80% save percentage and showed great poise in the cage in her best performance of the season.  The team also moved the ball well especially in the second half and demonstrated the speed and quickness they showed against Drexel and Lehigh. The brand of hockey is first rate and doesn’t reflect yet in their record.

Ana Steps Lafayette’s fine midfielder was sidelined this game recovering from a concussion suffered in Friday’s game. It is hoped she will be ready Saturday.

It was a good crowed of 612 as the Leopards have attracted over 600 fans on average this year. No doubt the Leopards will bring it all for an important match next Saturday at noon against the league favorite  Boston University. As we all left the field, we were remarking how everyone was looking forward to that match.