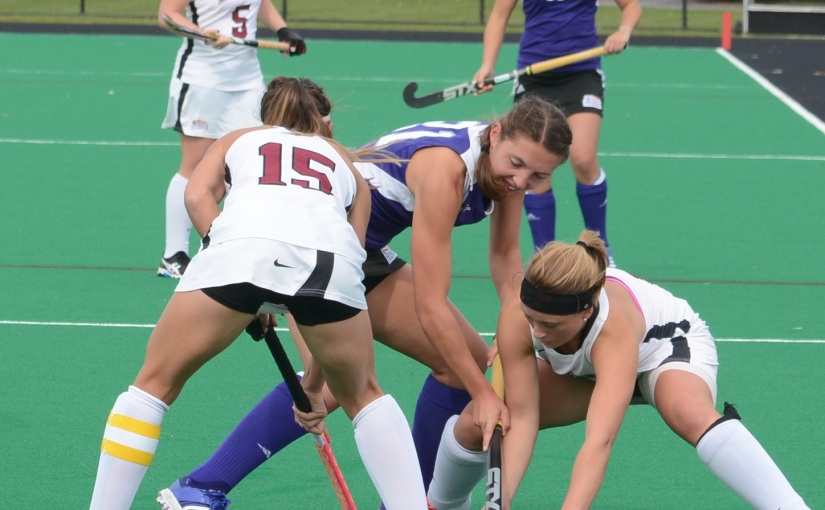 I have been writing this blog on this format and for a newspaper for years. I have also been an observer of college division one field hockey for 25 years, and yesterday I observed something I have never seen in the hundreds of games I have attended, including games ranging all levels of skill. At 58:30 into this important game an official called her first card of the day of a generally well played match. It was a yellow card against Hannah Millen,  Lafayette’s key defender and captain. OK, stuff happens, and the card was a judgment call. But then we found out she had assigned her a 10 minute penalty! Meanwhile Millen would not return until 1;30 was left, which she did, and scored on a penalty stroke. However, in the meantime Holy Cross was to score using the  extra player advantage which they had for almost the remainder of the final period.

I would assume a ten minute card would be reserved for the most egregious foul, with perhaps a player on the ground. Not so, as you will see in the enclosed video. You make the call. Games are better played when officials do not become part of the outcome. In this case this official became a factor in the eventual result. Not good, especially at this level. It was the first yellow of the game and only second card of the entire game which included a green for Holy Cross.

I don’t want to take anything from Holy Cross who played an inspired second half scoring 3 goals to win and stay in the hunt for a playoff spot, but there are 22 contestants on the field and it should be decided there.

Lafayette started off strong scoring after only seconds were run off the clock in the first period on a corner with a Magadan strike via a Turner to Millen assist. Things looked good for the Leopards as they used the speed of Ellen Coulbourne and Kendall Weedling to advance the ball upfield into scoring position . However, Lafayette had several scoring chances thwarted by Inch, the Holy Cross goalie.

The second half saw Colbourne double and triple teamed as the Crusaders during halftime planned to take away the Leopards speedy weapon. Having only gotten 4 corners in the first half Holy Cross managed to get 10 corners in the second and at one time 4 corners succeeding in a row were called against the Leopards. The Crusaders were tenacious guarding Lafayette closely and taking advantage of opportunities. Mauren Conolly was active scoring two goals in the second period while Michelle McNeil was to get the go ahead goal on a corner at 55:51. The all important insurance goal was made at 59:58 after the 10 minute yellow.

The game ended on Millen’s goal on a stroke called with five seconds remaining highlighting the importance of that insurance goal assuring there would be no overtime.

So you got all that. To the players. just win and what will be will be. And I have become an American fan against Bucknell just for next week!!